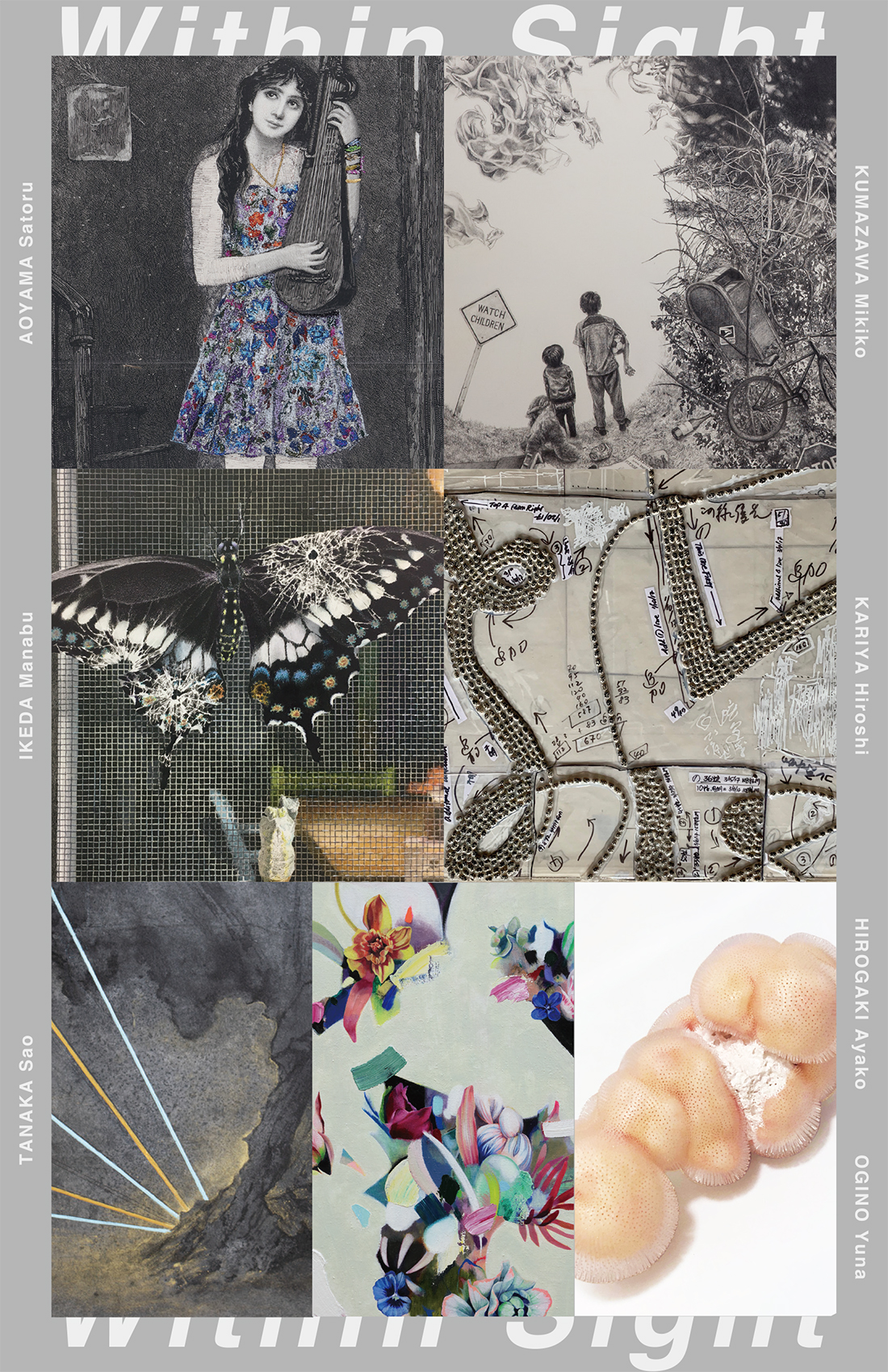 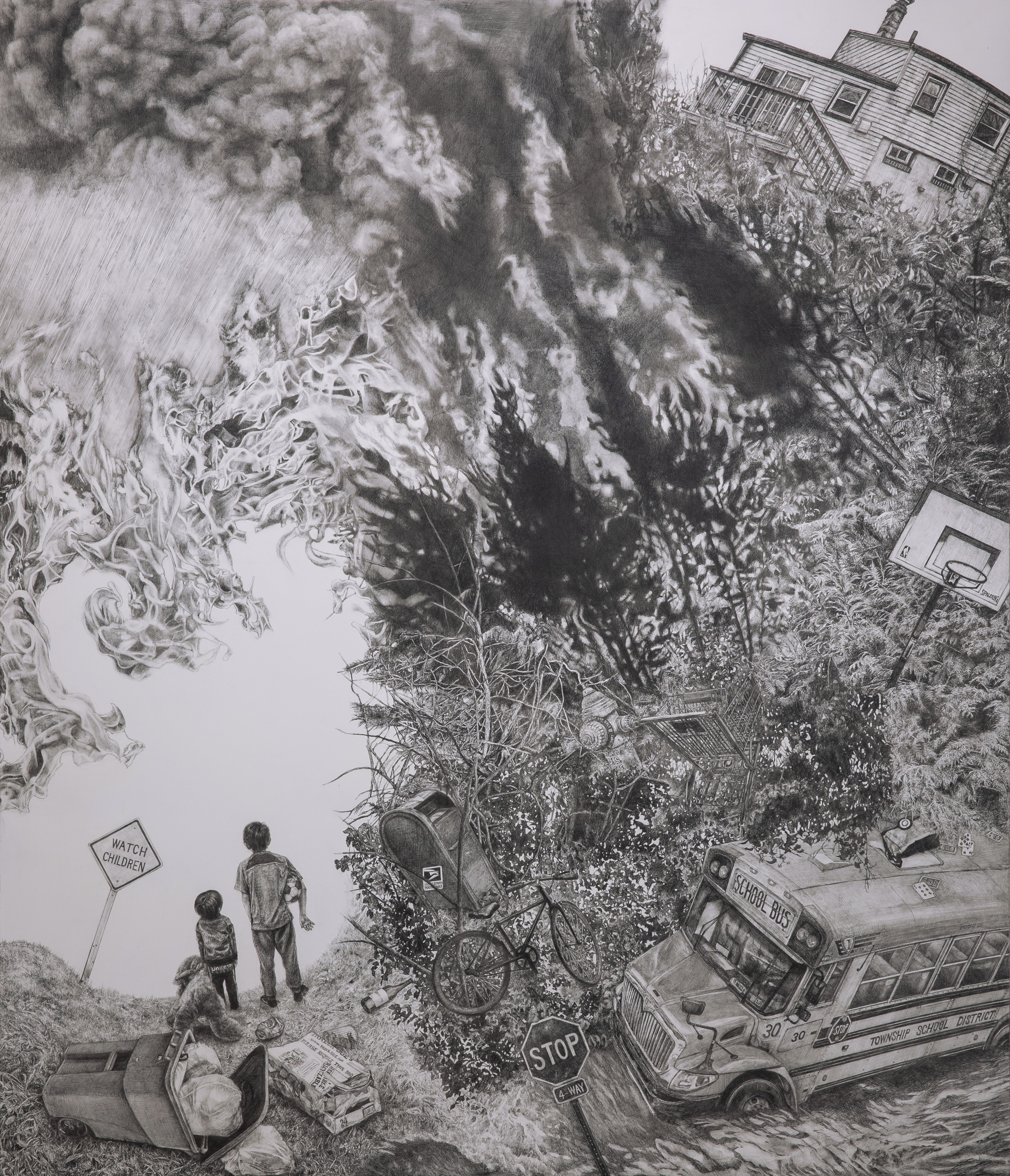 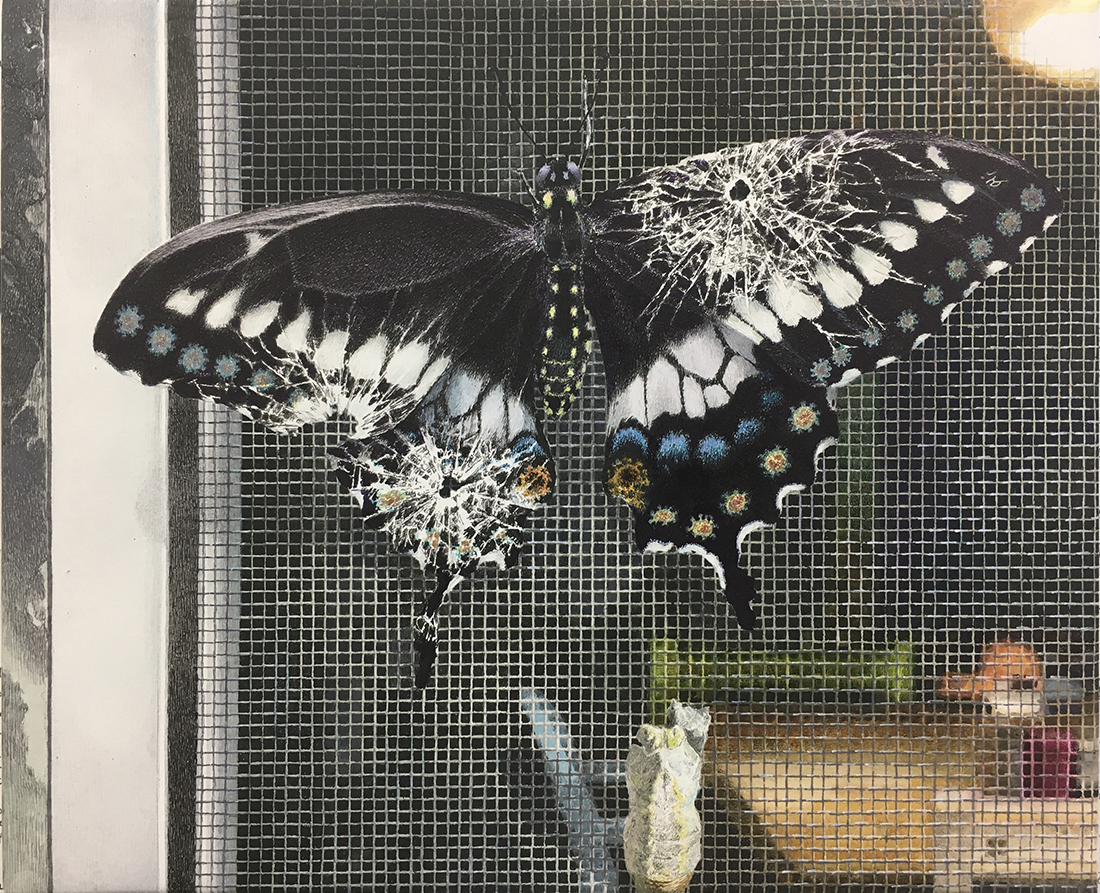 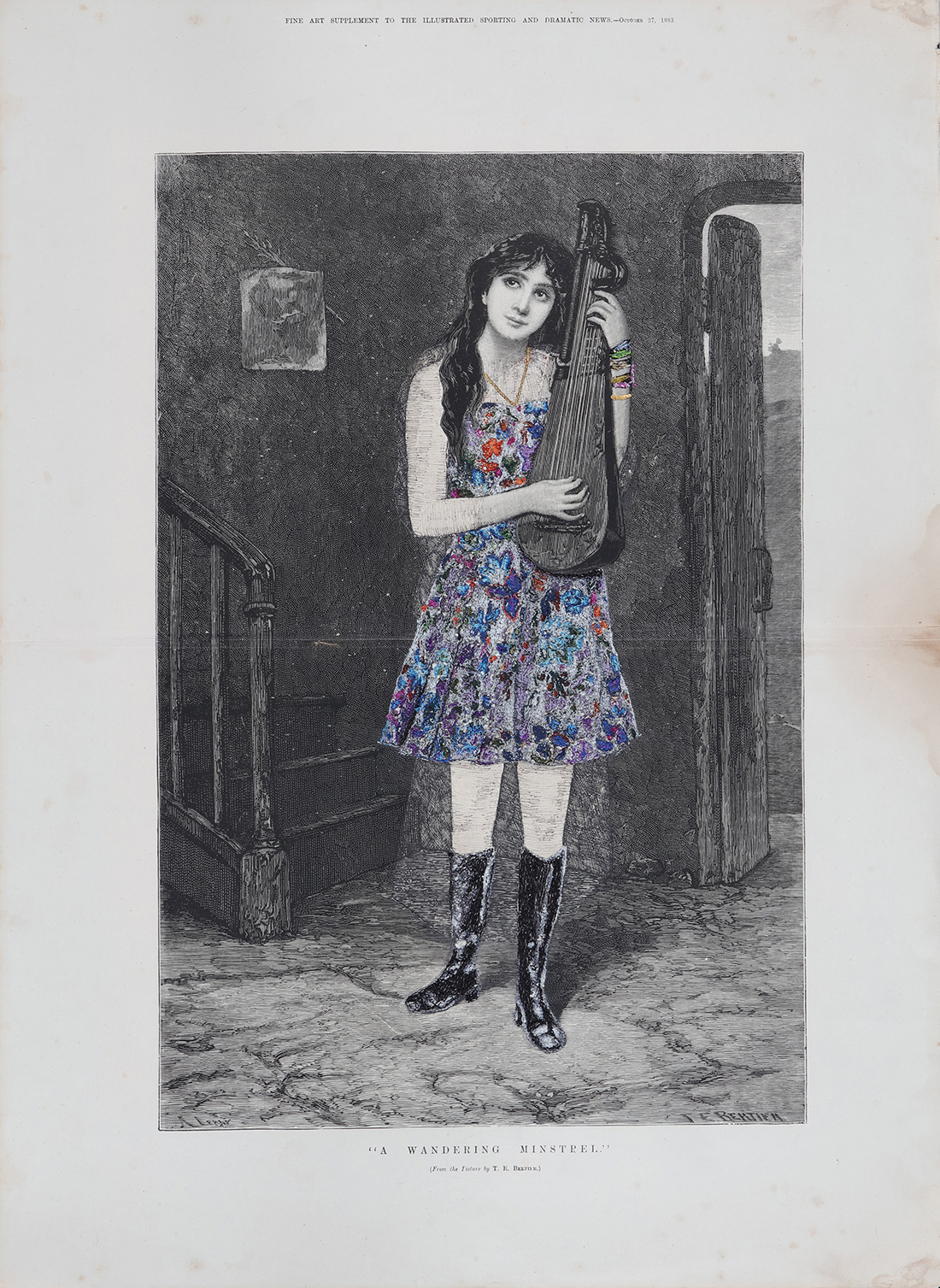 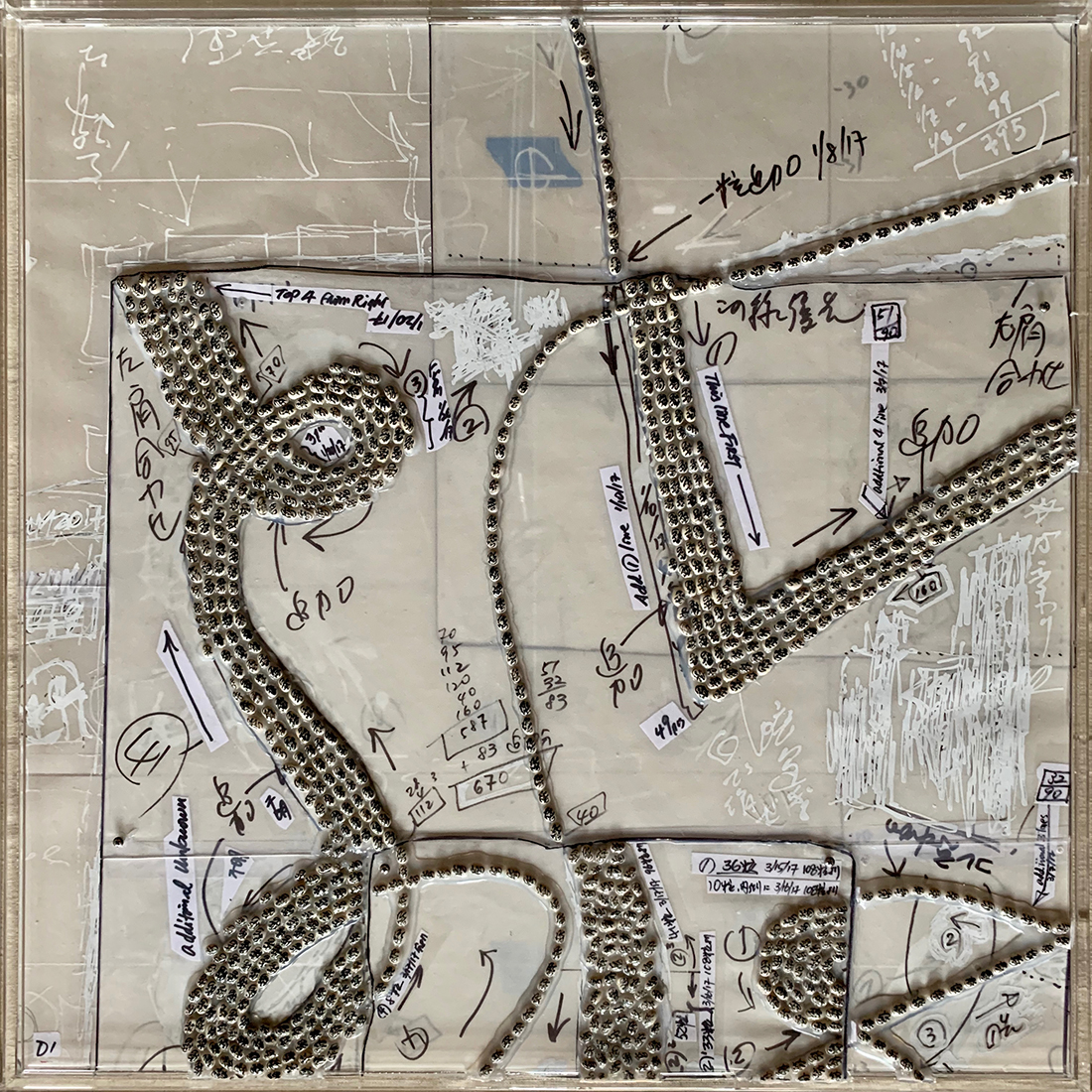 Aoyama Satoru (b.1973) presents numerous works which expand the frame of the embroidery medium, by questioning the values inherent in humanity and laborer within the continuing changes effected by modernization. In this exhibition, we show one of his series of works “News From Nowhere” in which Aoyama manipulates 19th-century vintage prints from Victorian Britain, applying to them, elements of collage, drawing and sewing machine-rendered embroidery. This series of work depict what he believes to be the current trend in anit-globalization, on top of William Morris’ belief in the resurgence of medievalism.

HIROGAKI Ayako (b.1984) is an artist who creates work with human body as a motif. Her works use numerous thin rods of glass which surround and blur the contour of a figure, in order to express the fragility of the body as a substance, and the uncertainty or fleeting reality of human’s existence and life.

The extremely intricate works of IKEDA Manabu (b.1973) are made in acrylic ink using pen less than 1mm thick, to draw and weave civilization and nature into a story in an immaculate detail. For three years, he did a residency at Chezen Museum of Art, in Wisconsin from 2013 to 2016. During that time, he created his largest work “Rebirth” to date, reaching 118 inches high and 157 inches wide, which took the whole three years. His works themed on coexistence between nature and human have garnered international acclaims for their expressive and imaginative qualities.

For many years, KARIYA Hiroshi (b.1948) has been developing work based around the concept of sutra. One of his artworks, “Seed Sutra” comprises of writing the three words “the now is” onto small amounts (specks) of seed every single day. For him, the act of writing “the now is” pertains to pointing at an exact moment between reality/illusion, truth/false, and fabrication/creation. Kariya began working on this piece in 1984 and has continued production on it ever since, with numerous interim pauses.

KUMAZAWA Mikiko (b.1983) is known for her extremely vivid monochrome drawing, combining imagery of the land of Japan from the artist’s daily life and her own imaginative perspective. She depicts buildings with precision, showing the complex chaos of the city, while the landscapes and figures are imbued with raw dynamism. Her creative process takes several months and is carried out with nothing but a pencil.

OGINO Yuna (b.1982) receives inspiration from ikebana flower arrangements and traditional Japanese gardens to compose her painting, amalgamating the lights, the passing of time, and the colors of flowers into one image. In addition to oil painting techniques, she uses brushes specific to Japanese style painting to draw lines. These lines represent the strength and vulnerability of plants and insects, which in turn metaphorically represent our personal memories and the meaning of richness for women and for human society as a whole.

TANAKA Sao’s (b.1987) painting practice evolves around painting cave landscapes that dates back to time when no life existed, when there were only rocks, light, water, and atmosphere. Her process of spilling black ink on paper, to create random stains which forms topographic painting, imitate the Earth’s creation as the magma formed the land. Her works express the moment of loss and loss of our senses.

With the effects of COVID-19, the art world was also drastically changed, and has led to a direction where art is enjoyed through online image presentation, without stepping a single foot into an exhibition space. However, not matter how high the resolutions of the images are, there are kind of artworks with feelings behind every brush strokes and materiality which cannot be understood without actually seeing them with your own eyes. In this exhibition, we present a collection of works which can only be felt and really understood by seeing them in person.