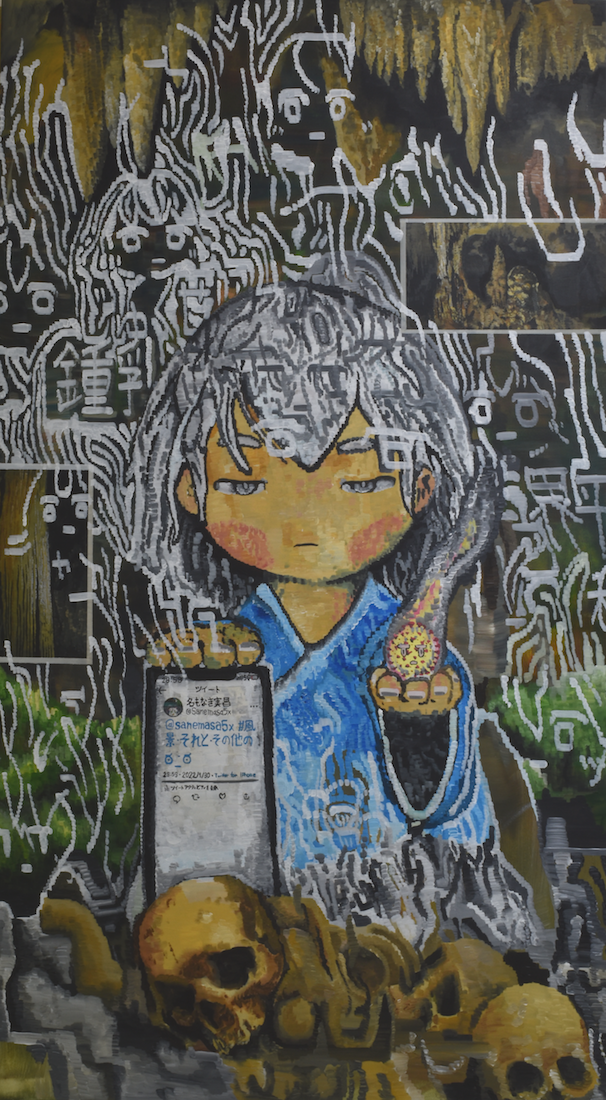 Mizuma Art Gallery is pleased to announce the opening of “@sanemasa5x #landscape – and – so forthಠ_ಠ,” the first solo show of works by Namonaki Sanemasa, on January 26.

Next to holding exhibitions, Namonaki Sanemasa has been using his account (@sanemasa5x) to post works on platforms such as Twitter via since 2015. The works were inspired by the phenomenon of Internet personalities and artist characters, and have been affected by such technologies as touch screens and social media.

Namonaki’s works come to life in real-time as the artist overpaints core motifs one by one with related images found on the Internet, and thus combine aspects of searching and depicting at the same time. They can be seen as modern landscape paintings of the Internet age, with accumulations of information resulting in abstract images, and characters being – sometimes unintentionally – pictorially disassembled to pop up like ghosts.

Works shown at this exhibition include a new one that consists of 21 panels with a 16:9 aspect ratio, the standard display ratio that the sizes of most of Namonaki’s works are based on. Measuring 486 x 630 cm, his newest piece is at once the largest he has created thus far.

Accelerated also by the COVID-19 pandemic, online activities and the Internet itself have experienced rapid developments in the most recent years. On the other hand, the artist points out an increasingly simplified perception of things in every way, that he seems to be observing as an effect of the ongoing situation with people being limited in their mobility among others.

Here he presents works in which he juxtaposes images that, as a result of these circumstances, don’t seem to take shape, and that represent an attempt to illustrate new narratives generated by intentionally mixing up contexts. They are informed by a “new perspective ಠ_ಠ” that isn’t normally found in narratives, and generated by lumping together motifs that aren’t compatible, or magnifying single parts of them.

We invite you to experience an array of landscape pictures that embody the present age, made by Namonaki Sanemasa as a new challenge in the artist’s approach to painting.