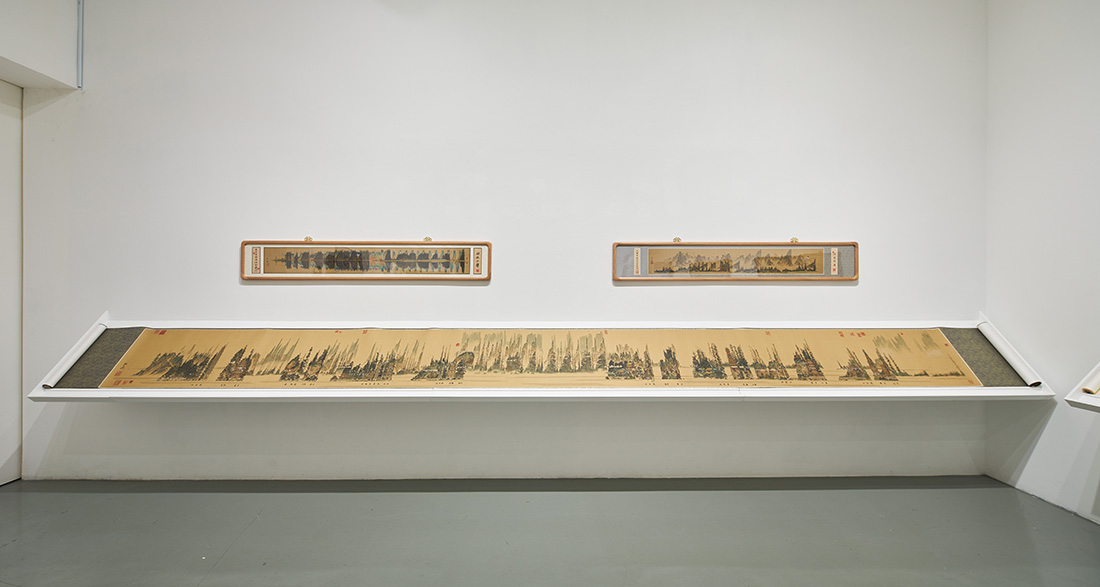 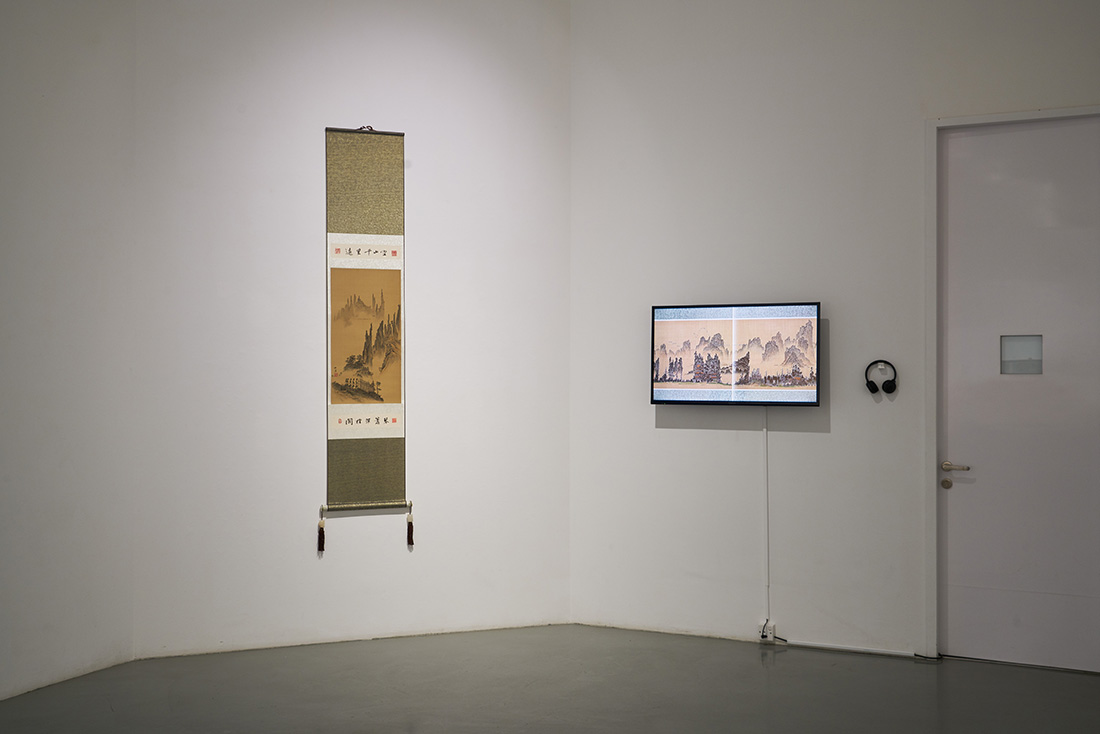 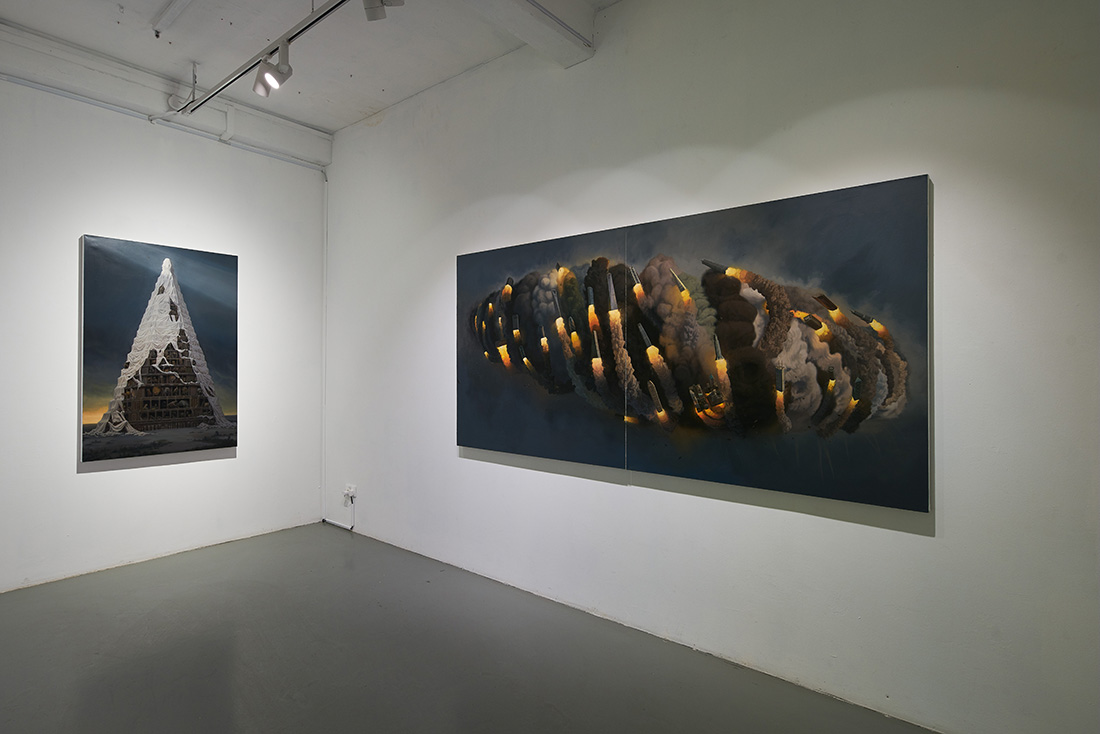 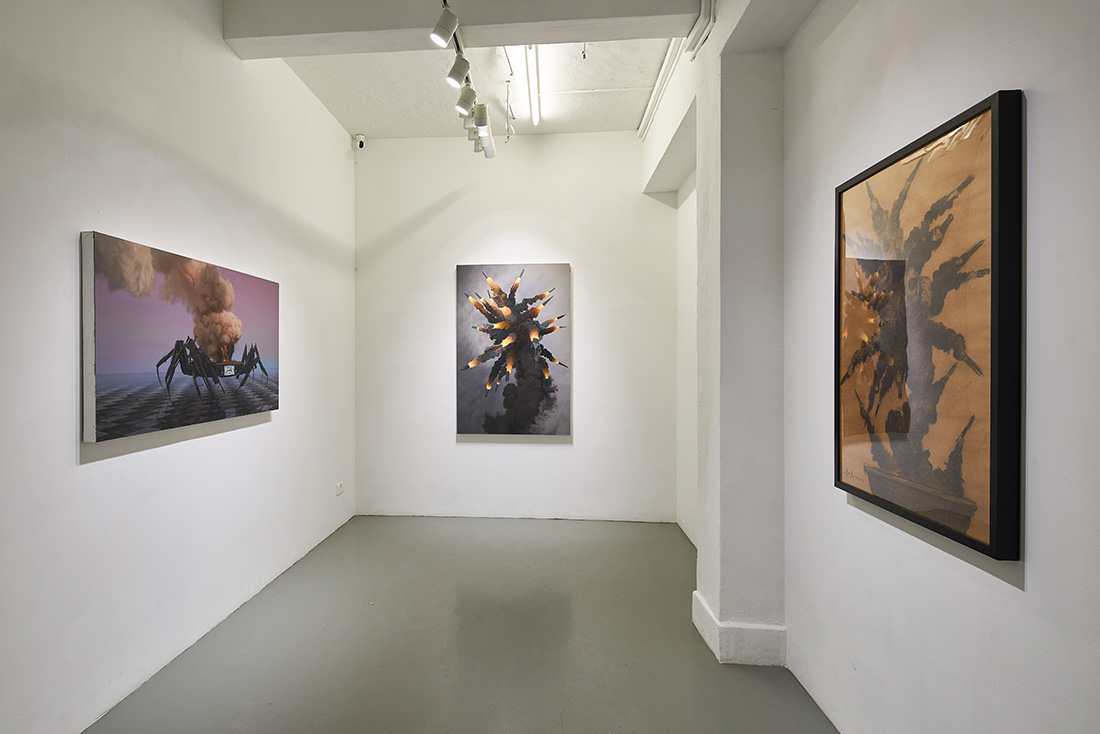 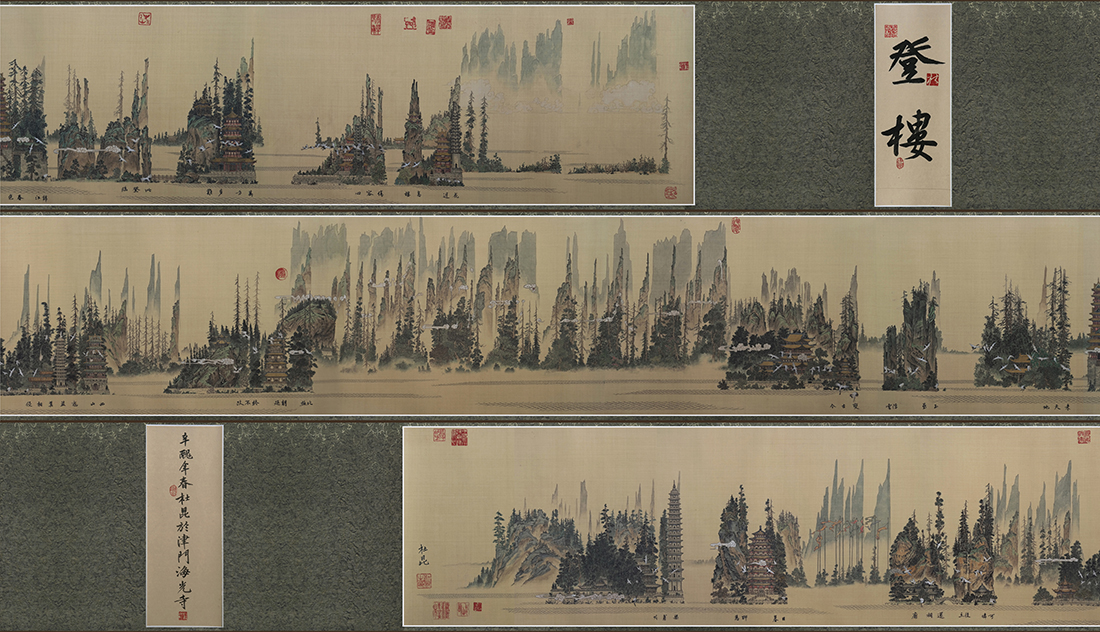 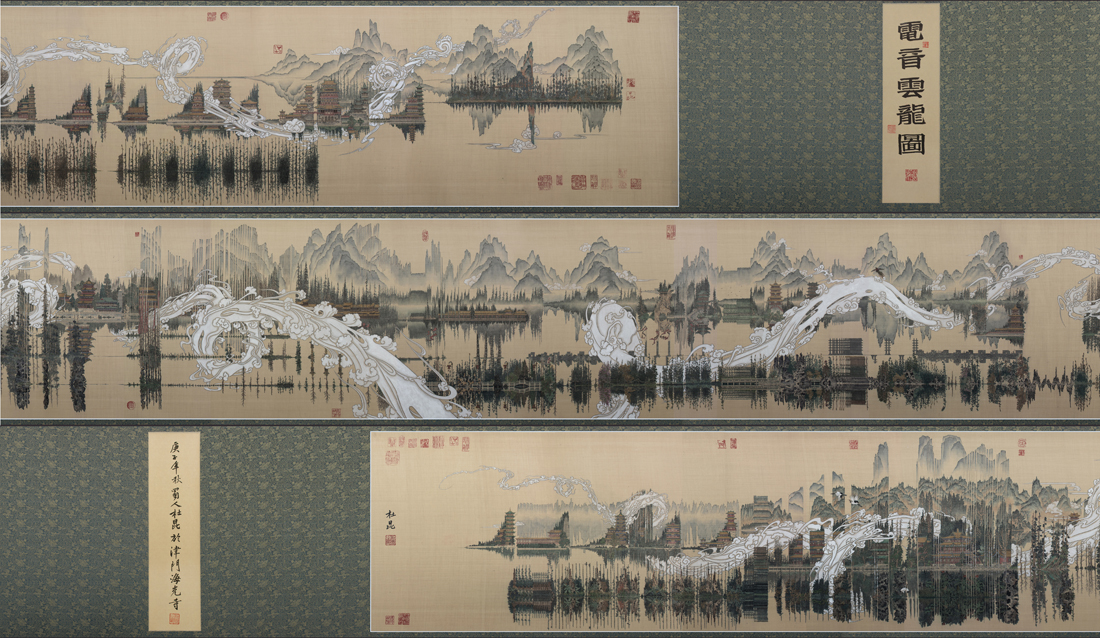 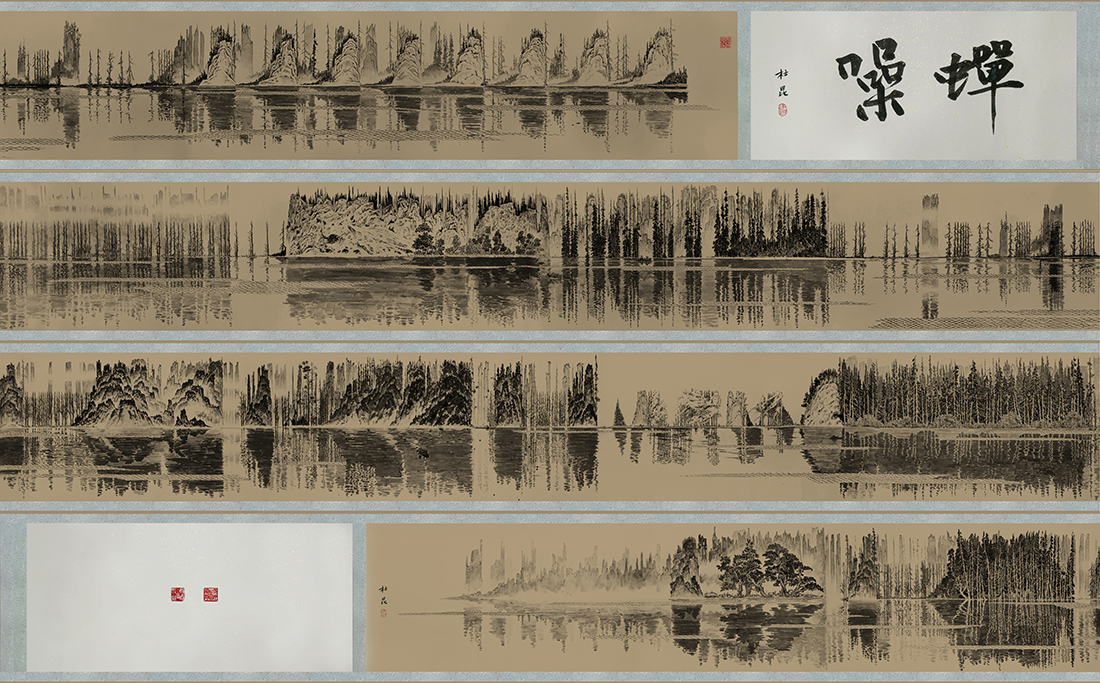 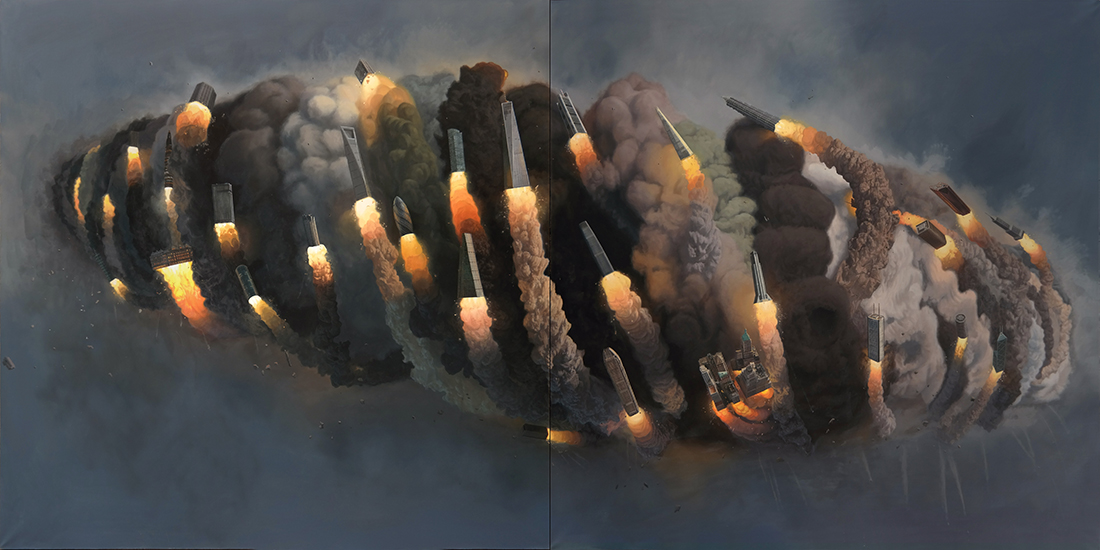 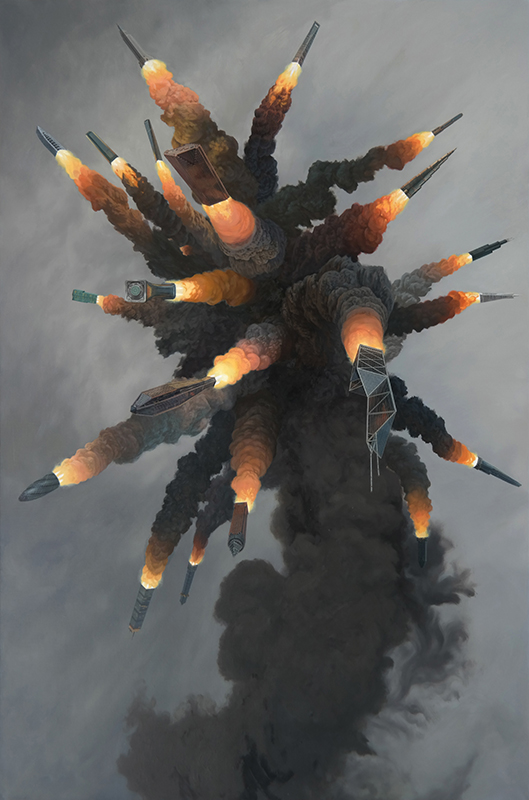 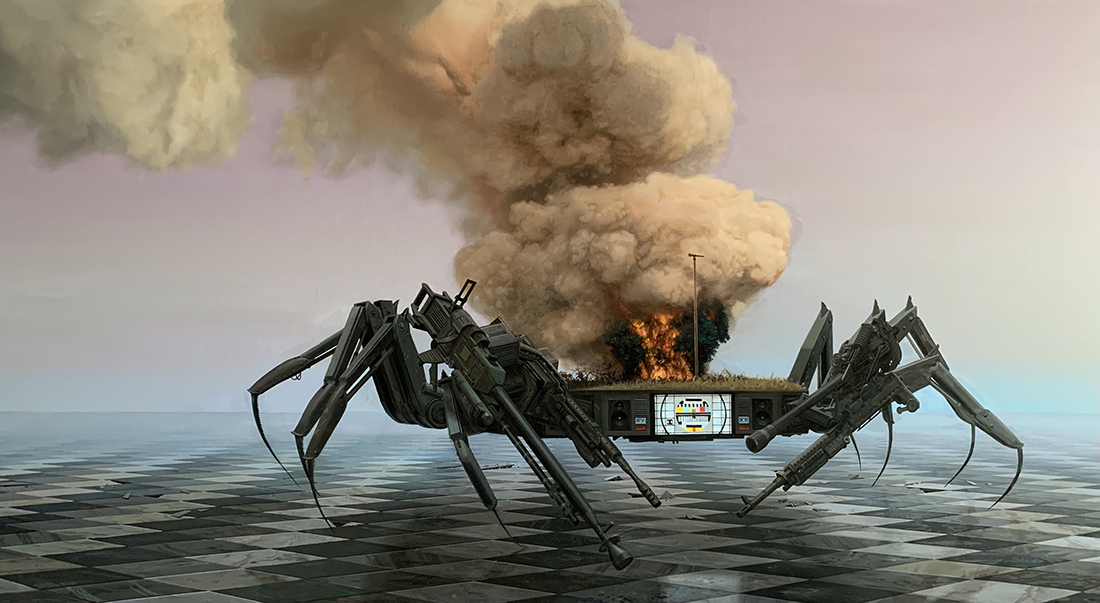 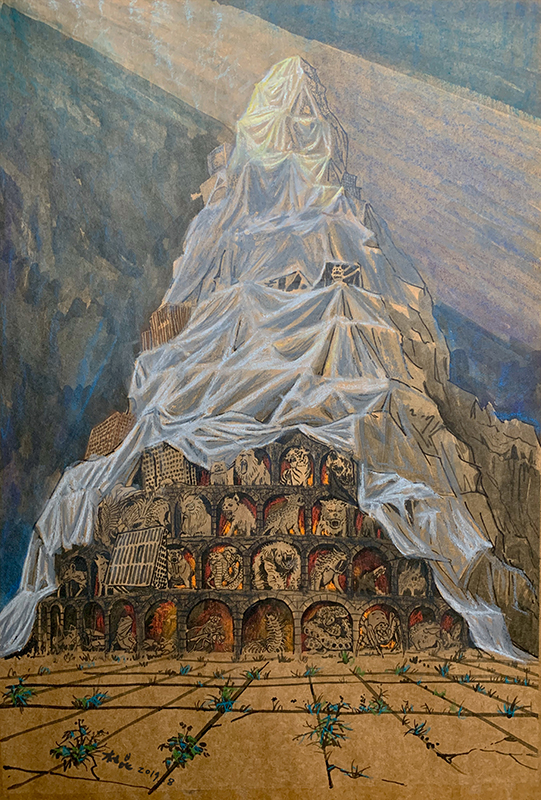 The scrolls of landscape paintings in the series Scores of Landscapes look serene and ancient, as if they have frozen the history of thousands of years. But in fact, these landscapes themselves are pieces of nervous, sad, discordant, and unconventional music.

Du Kun applies the logic of painting to compose music, and subsequently translates the various elements of the compositions into traditional Chinese landscape paintings. Finally, these painted ‘landscape compositions’ and their musical compositions are played out through a video, with both mediums corresponding precisely to each other, forming a new kind of music score.

Scores of Landscapes brings traditional Chinese painting and modern music together, where static and noise are simultaneously present in the artworks, with mutual influence and interdependency on one another – just like two people who speak different languages but find a special way to communicate with each other.

Scores of Landscapes, Du Kun’s first ever solo exhibition in Singapore, will run from 5 June till 18 July 2021.

“The scrolls of landscape paintings in this series look serene and ancient, as if they have frozen the history of thousands of years. But in fact, these landscapes themselves are pieces of nervous, sad, atonal, and even eccentric music.

Playing music is my only hobby. I explain music theory entirely in terms of painting. In fact, they are interlinked. It can be said that a painter composes music with pigments, and a musician uses sounds to paint, just like mutual translation between different languages. Since I graduated in 2007 and began my practice, I could not find the real bridge between painting and music for over ten years. Until one day, while I was working on a music file, time began to hang heavy and I suddenly saw the sound waves on my screen change in front of my eyes. They morphed into a large forest and a lake. If I drew them, would the image make sense?

Sound waves are like the shadows that musical instruments cast under the sun. Musicians can tell by the waveforms alone if it is a percussive or plucked instrument, vocal or synthesizer, because different instruments produce different shapes of sound waves. From then on, I began to do experiments, adjusting the parameters of the synthesizer to manipulate the shapes of the waveforms, and using different sources of sound to achieve the desired shapes of the sound waves. Now, I see them (the sound waves) as concrete landscapes.

In terms of music, I found that in ordinary music, especially after master tape compression, the waveforms are very flat and monotonous, with not much room left for imagination. I had to move away from that kind of music arrangement, to have more fluctuating and variable waveforms. Using the mood of the painting as an initial guiding foundation to break away from the conventional routines of music arrangement, changes occurred at unexpected points and these had to be reflected in the paintings.

For example, multiple musical instrument tracks are used to show the different spatial perspectives of the landscape; the repetitive patterns of electronic music break the composition of traditional Chinese painting; the automatic curve in the music software is used to paint a cloud dragon winding between the mountains and rivers; using the delay and staccato effects translates a certain form onto the painting similar to that of a signal fault; the melodies as well as the high and low notes are represented by birds or clouds; the regular percussive rhythms by the reeds, tree stumps, or bridge piers; if the sound waves are spliced forwards and back, the waveform will appear like a bridge.

By using painting to influence music, the elements of music are transformed into these landscape paintings, becoming a new kind of music score. This series of works bring traditional Chinese paintings and modern music together, where ‘static’ and ‘noise’ are simultaneously present in the works – causing mutual influence, interdependency, and translation with one another. Just like two people who speak different languages but find a special way to communicate with each other.

The forest is more peaceful while cicadas are chirping and the mountain is more secluded while birds are singing.” Du Kun (b. 1982, Sichuan, China) graduated with a BFA in Oil Painting from the Central Academy of Fine Arts, Beijing, China in 2007. Du’s works have been featured in a range of exhibitions, including: Sights of the Mount Sumeru, Mizuma, Kips & Wada Art, New York, USA (solo, 2019); Temporal Turn: Art and Speculation in Contemporary Asia, Spencer Museum of Art, Kansas, USA (2016); Dark Songs for the Light, Du Kun and Zhao Na, Tianjin Art Museum, Tianjin, China (2014); and Made in China: Contemporary Chinese Artists, Luciano Benetton Collection, Milan, Italy (2012). Du was the Finalist in the Sovereign Asian Art Prize, Hong Kong (2020). His works are in the collection of the Spencer Museum of Art, Kansas, USA. Du Kun lives and works in Tianjin and Beijing, China.

– 蝉噪 / The Noise of Cicadas

– 临江听筝 / Listening to the Guzheng While Overlooking a River

– 枯林回声 / Echoes of the Withered Forest

– 空山千里远，琴箫弹指间 / A Thousand Miles of Mountains, A Few Seconds of Music