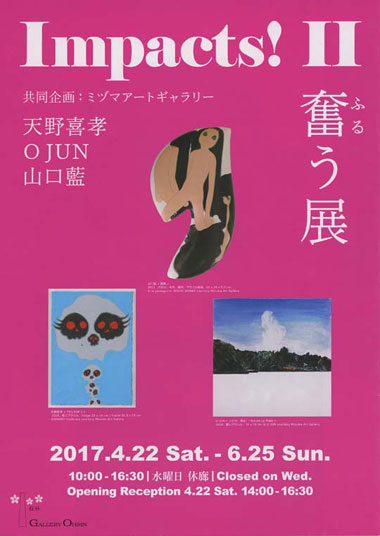 In this exhibition, three artists from Mizuma Art Gallery will be featured: AMANO Yoshitaka, O JUN and YAMAGUCHI Ai.

The term furuu “奮う” (“invigoration”) from the exhibition’s title is an ancient term, the character for which is shaped like a bird, which denotes the image of birds flying across the sky seemingly combined with that of the appearance of the human soul. It expresses the idea that if the souls of the dead became spirits in the form of birds that were unable to fly away due to limiting powers imposed upon them, that these birds would finally be able to rouse themselves and fly away.

In Shinto, during the “chinkonsai” ceremony for the repose of the souls of the dead, the person who undertakes the “furitama” is resurrected as the “furui”, and a purification ceremony is held.

Each of these three artists’ individual works’ characteristics and materials are unique, and each offers a revitalizing overturning of convention, all of which will be displayed within the environs of Gallery Ohrin in the grounds of the Hitachi no Kuni Izumo Grand Shrine in Ibaraki Prefecture.