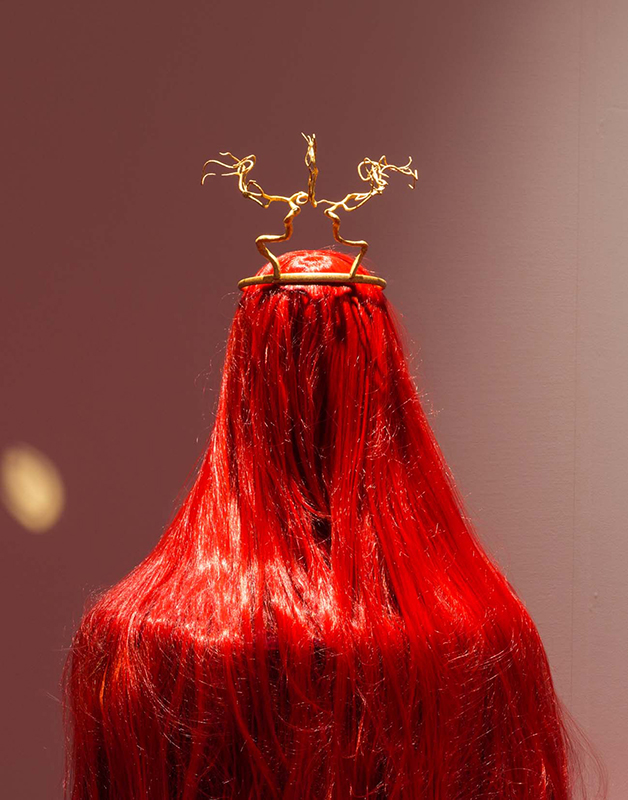 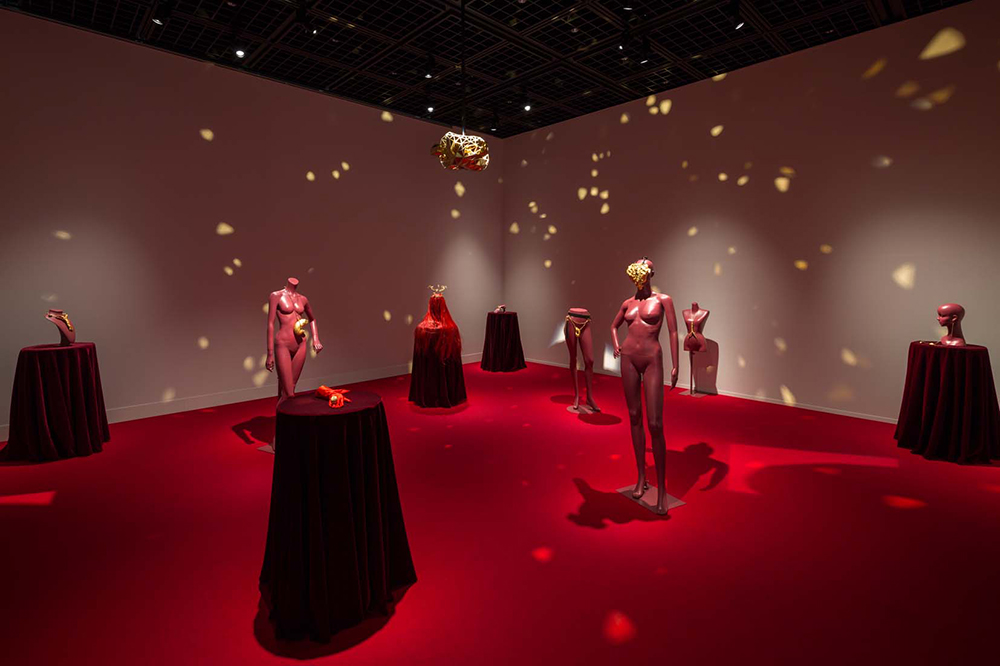 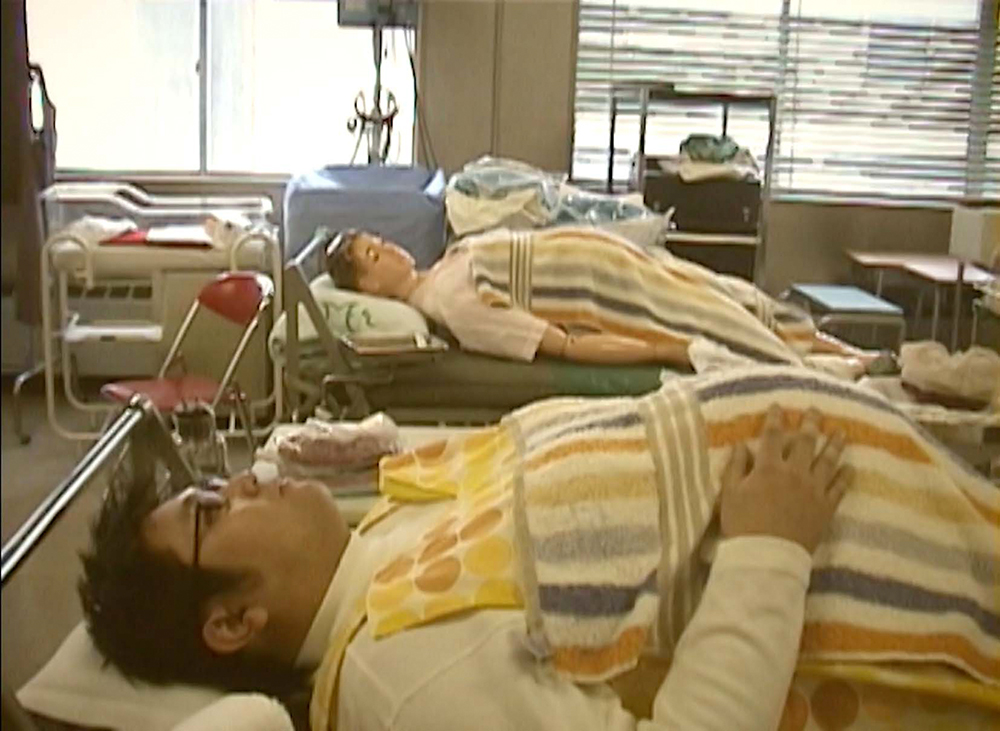 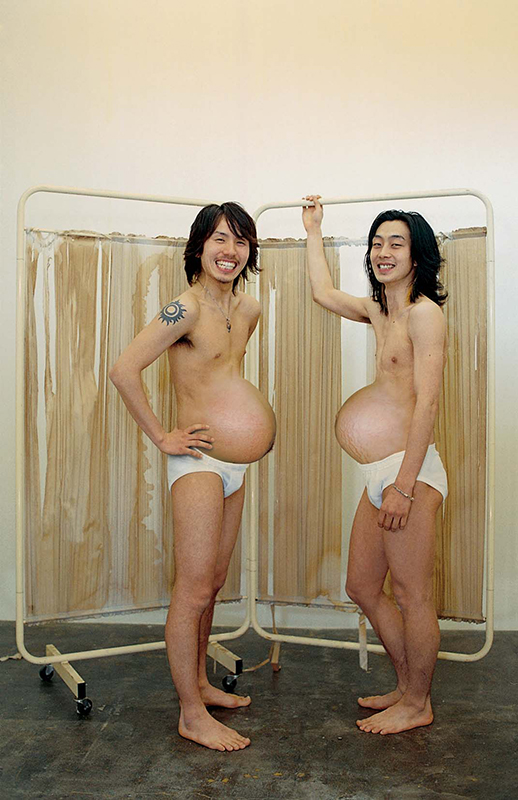 The artworks on display for this exhibition feature Okada’s latest series “Engaged Body,” and “The Delivery by Male Project” made in 2002 (revised version for 2019).

“Engaged Body” was presented at Yebisu International Festival for Art & Alternative Visions, February of this year, receiving very favorable reviews. Since then, the work has been selected by Ars Electronica Center in Linz, Austria for a one year permanent display in their exhibition, and garnered attention in both domestic and abroad. For this exhibition, precious original drawings and new two-dimensional work are revitalized into the installation.

Set in a fictional future, Japan’s regenerative medicine continues to advance, to where people are able to use cellular differentiation to create all types of organs from a single cell line, and then donate them to others. From all of this, a culture arises where, as commemoration of the relationship between donor and recipient, a part of the regenerated organ is scanned, turned into jewelry and sent as a gift – “Engaged Body” is that sort of fictitious story taking place in the future. While the donor and recipient aren’t able to know each other’s names, they instead send and receive the “Engaged Body Jewelry” as a proof of pledge in establishing a physical relation.

Featuring at the same time, is a video work made seventeen years ago entitled “The Delivery by Male Project” which again portrays a fictional near future where “Men can conceive and give birth.” It follows a pregnant man identified as “S.K.” who feels burdened in having meaningful conversations with others, who doesn’t want a girlfriend, and who also doesn’t want to be married, but eagerly wishes that he had his own child. All things that relate to pregnancy and childbirth for Japanese women, a general lack of understanding towards mothers’ ways of life in society, the attendant joys and stresses of raising children, and the problem of a declining birthrate; many of these things that Okada noticed through her own experience of pregnancy and delivery, are what became the driving force for her future production. In this setting – where males have the ability to conceive and deliver a child, through advanced medical treatments, it develops beyond the differences in gender, and give the viewers a much broader and multifaceted perspective. Since the presentation at Kitakyushu Municipal Museum of Art in 2002, this video work has been displayed in multitude of group exhibition shows such as in Museum of Contemporary Art Tokyo in 2005, and Brooklyn Museum in New York in 2007. For this exhibition, an original background music was created , presenting this revised version for the very first time.

While these two works together both depict the fictional futures, they also simultaneously act as mirrors reflecting our present reality. Viewing them, one can glean the way in which advanced medical treatments have changed over the last seventeen years. On the other hand, they also reveal the persistence of certain problems facing human society, such as discrimination, economic disparities, and poor living conditions. The real future should be full of choices, and it’s up to us to make these. It will be a pleasure if this exhibition “DOUBLE FUTURE” can be appreciated by as many people as possible.

★Okada’s very first art catalogue, which centers around the two artworks presented for this exhibition, will get published soon!