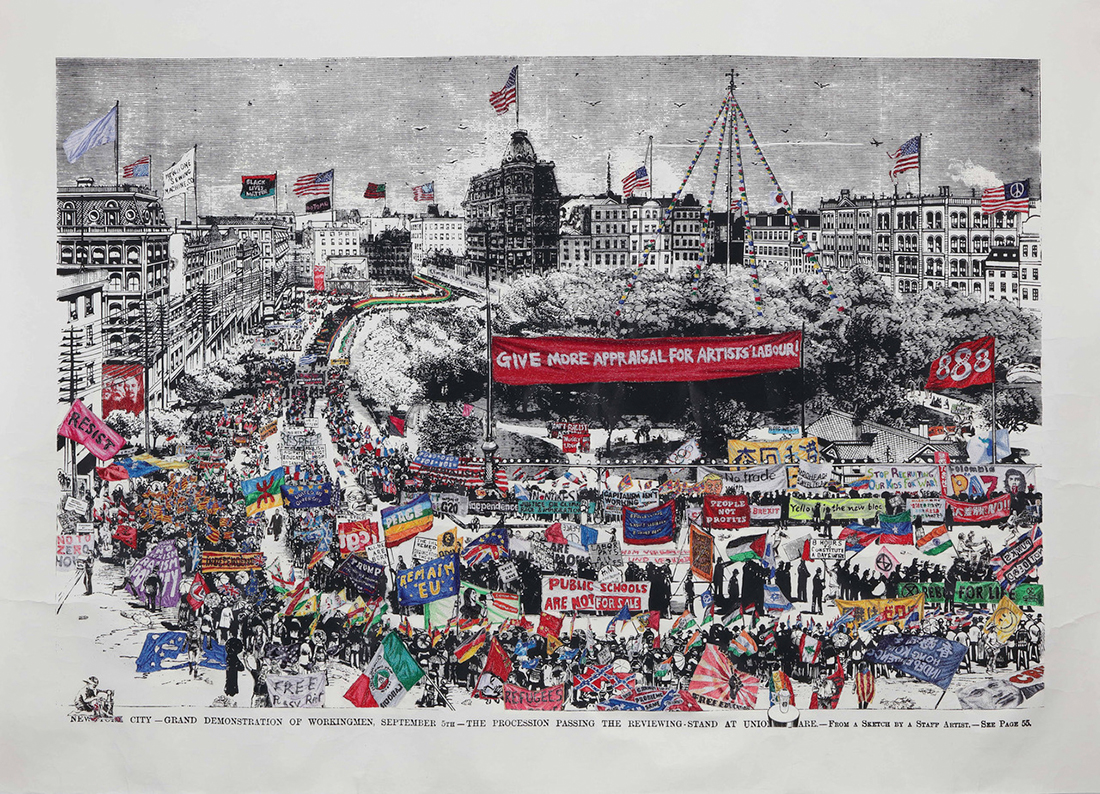 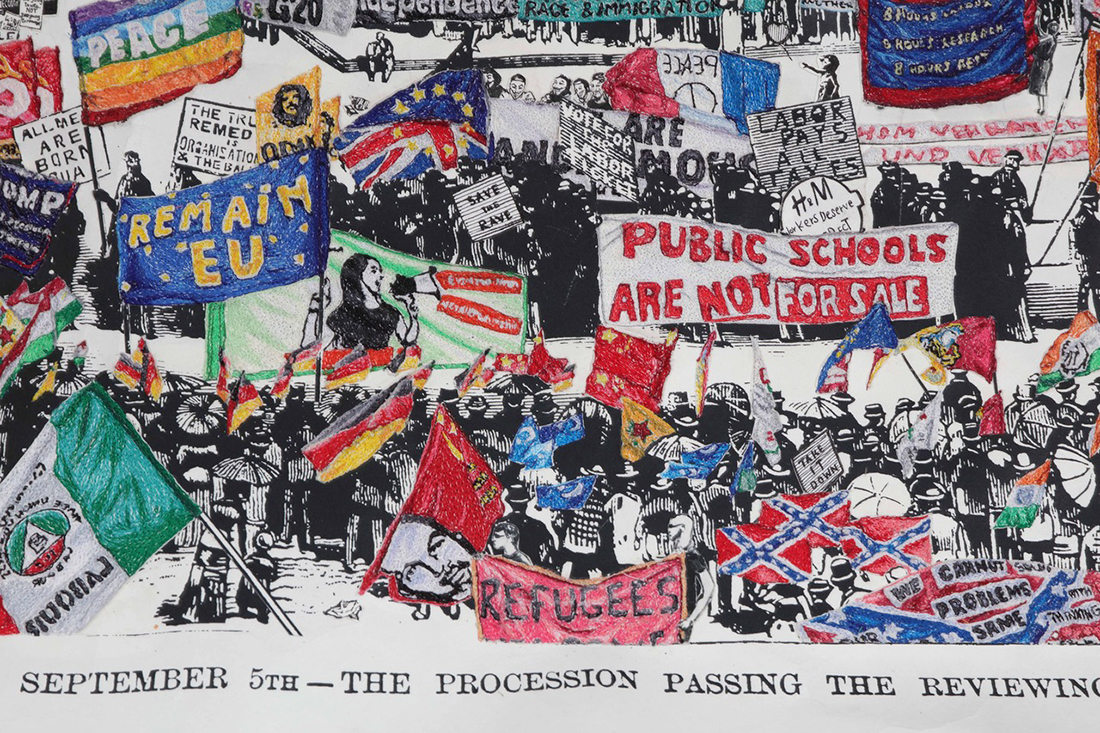 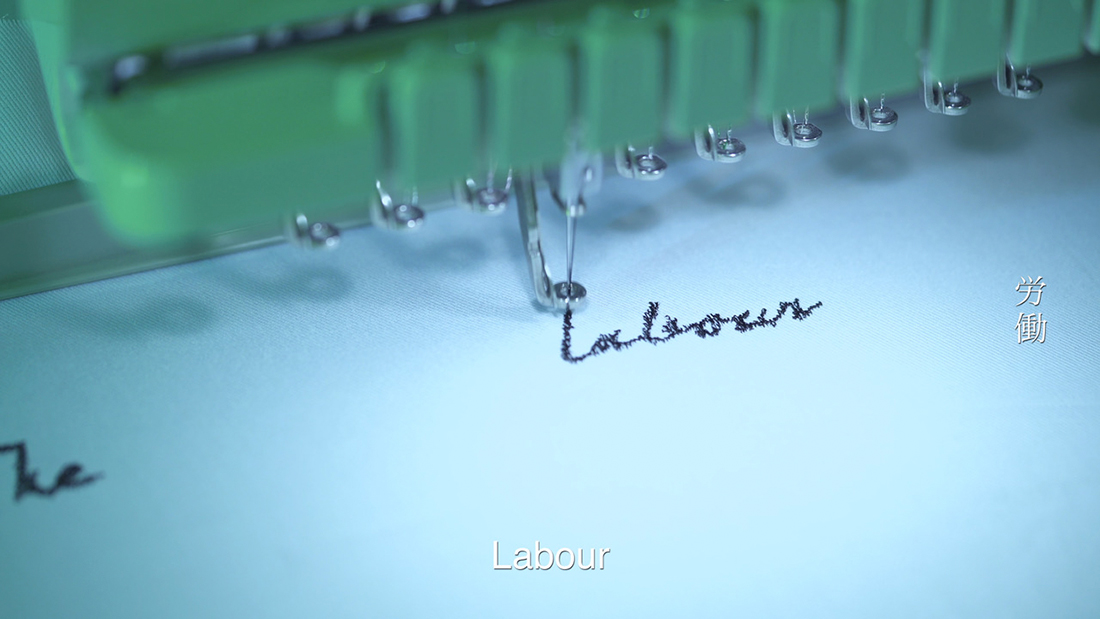 Aoyama Satoru who majored in textile during his college years in England, came across a vintage, Singer-made sewing machine. Ever since then, he has created embroidery works that examine the interactions related to sewing machine, such as relationship between man and machine, and system of manual labour that has gradually changed over time.

It has been two years since his last solo show, and this exhibition will consist of embroidery and video installation, a new attempt at embroidering on silkscreen print, and the very first attempt at using a computerized sewing machine for the artist who is known to create with an old industrial sewing machine.

《8 HOURS》is an installation work that was inspired by the famous slogan “Eight hours’ labour, Eight hours’ recreation, Eight hours’ rest” by 19th century British businessman and social reformer, Robert Owen. The movement that demands eight hours of work a day, is widely recognized as the origins of May Day, and continues to be celebrated to this day. However, the rapid development of AI technology in recent years has the potential to change the ways of humanistic condition in work and life advocated by Owen, by not only reducing labor but also depriving people of work. Aoyama who recreated the slogan to fit his own state of life, gives much to contemplate in our own lives as well.

《News From Nowhere (Labour day)》is a continuation from works presented in the last solo exhibition, where the embroidery is stitched right onto the illustrations of 19th century magazines, only this time, using a newly adopted silkscreen technique to make it possible for him to create a large-scale work. This new piece to a certain extent, is a caricature of our present world, as it illustrates the “Labour Day” scene that took place in the 19th century New York, with incorporation of flags used in the most recent demonstrations and movements around the world, plus the flag that displays the artist’s slogan, as well as various cultures on art, film, and music that were picked up from the internet.

《The Lonely Labourer》being the title of this exhibition, is a video art that captures on film, a fully computerized and automated sewing machine making an embroidery. In this footage, the sewing machine simply embroiders the words from letters written by William Morris; a socialist, and founder of the 19 century Arts and Crafts movement. Words such as waste, individuals, class, competition, profit, wealth, labourers and work that are picked out from the letters, are automatically transcribed by a computerized sewing machine. The fact that over 100 years have passed since the day they were written, and which are now being sewed in by a computer, is a sort of satirical response towards Morris who denied the use of machines for work, but also in a way, a prophecy that brings attention to the problems related to labour we face and its future.

Through this work, Aoyama asks the question: In a society that is changing with the rapid progress of technology, where does human nature stand? Where does aesthetic consciousness and art itself stand? It also raises questions about the future of labour and doubts about the outlook of the artist’s own work.

We are pleased to invite you to see Aoyama Satoru’s exhibition, full of satire and humor laid into a beautiful and elaborate embroidery artwork.