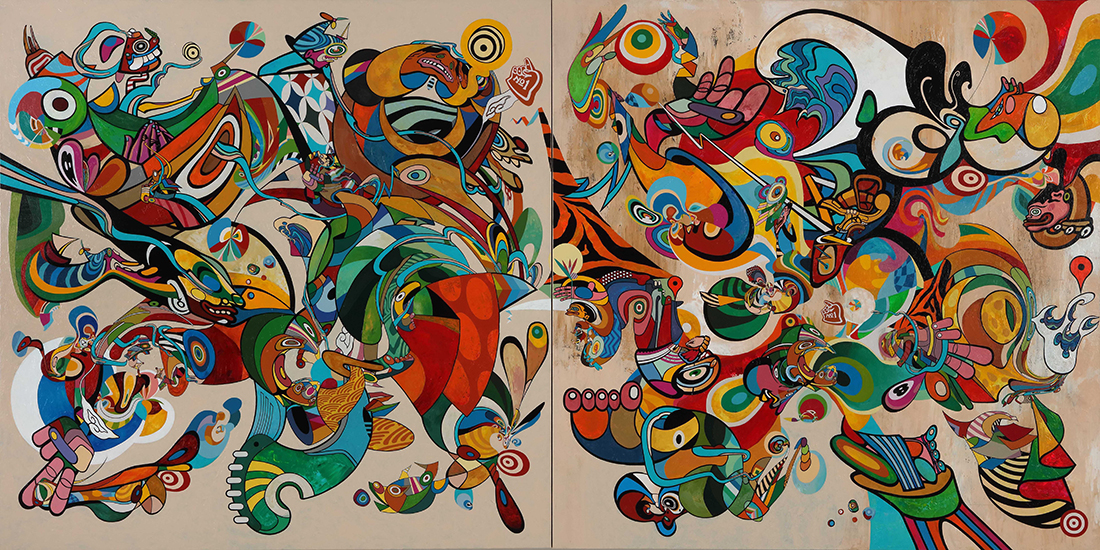 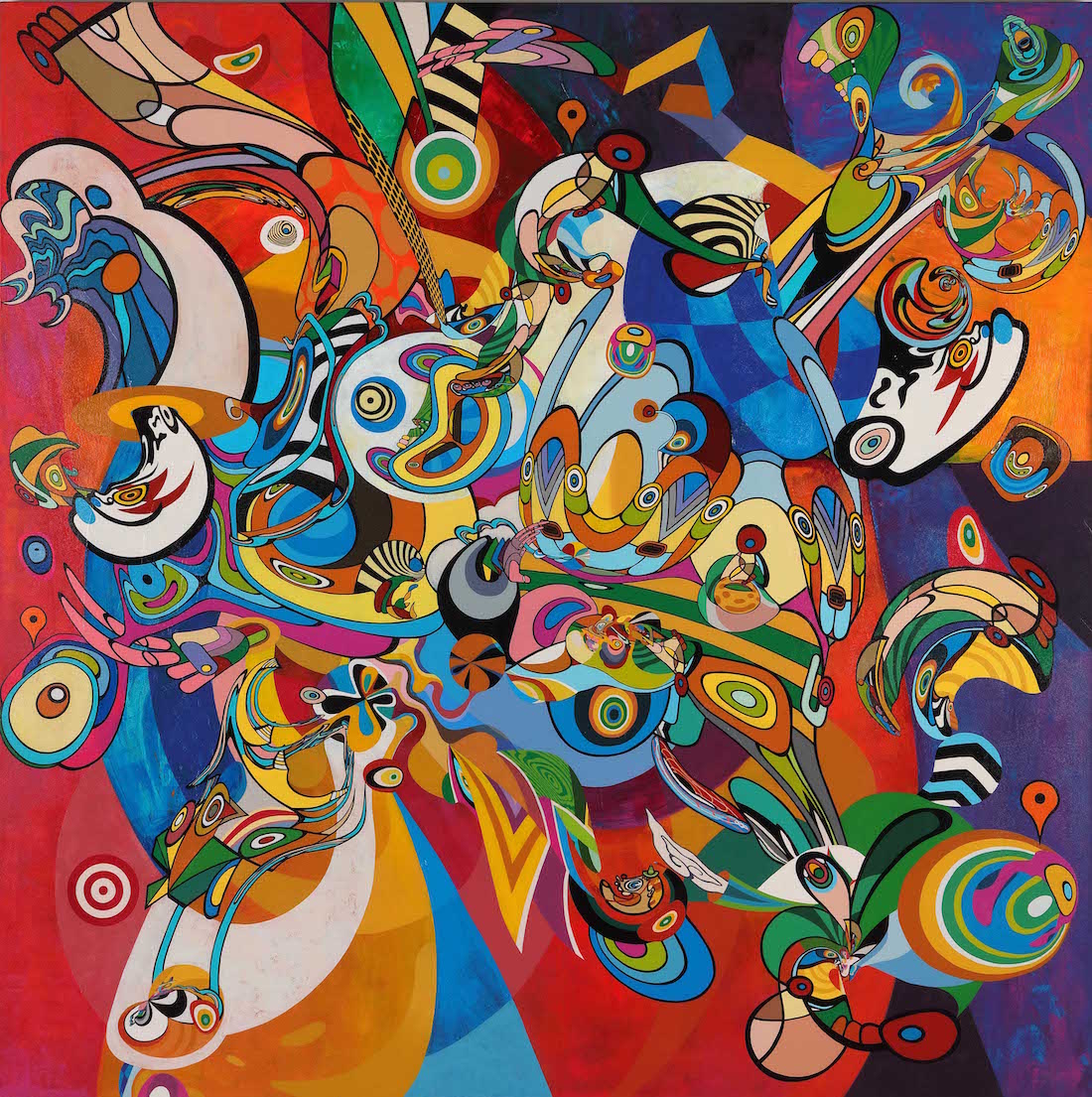 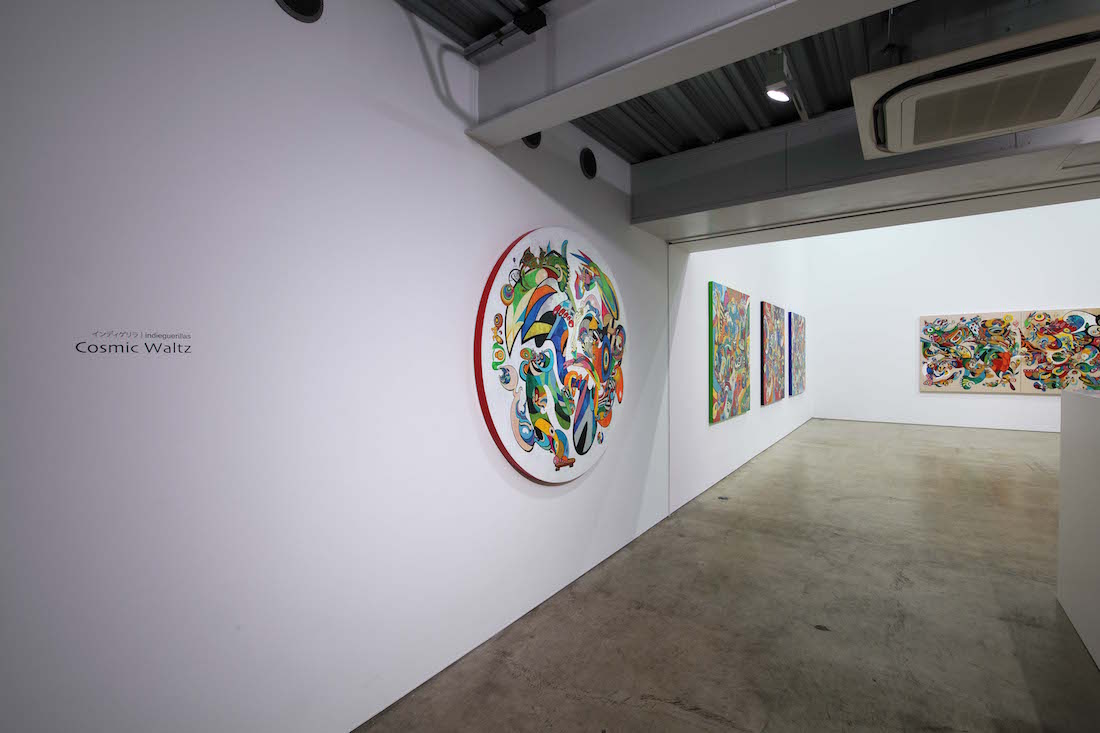 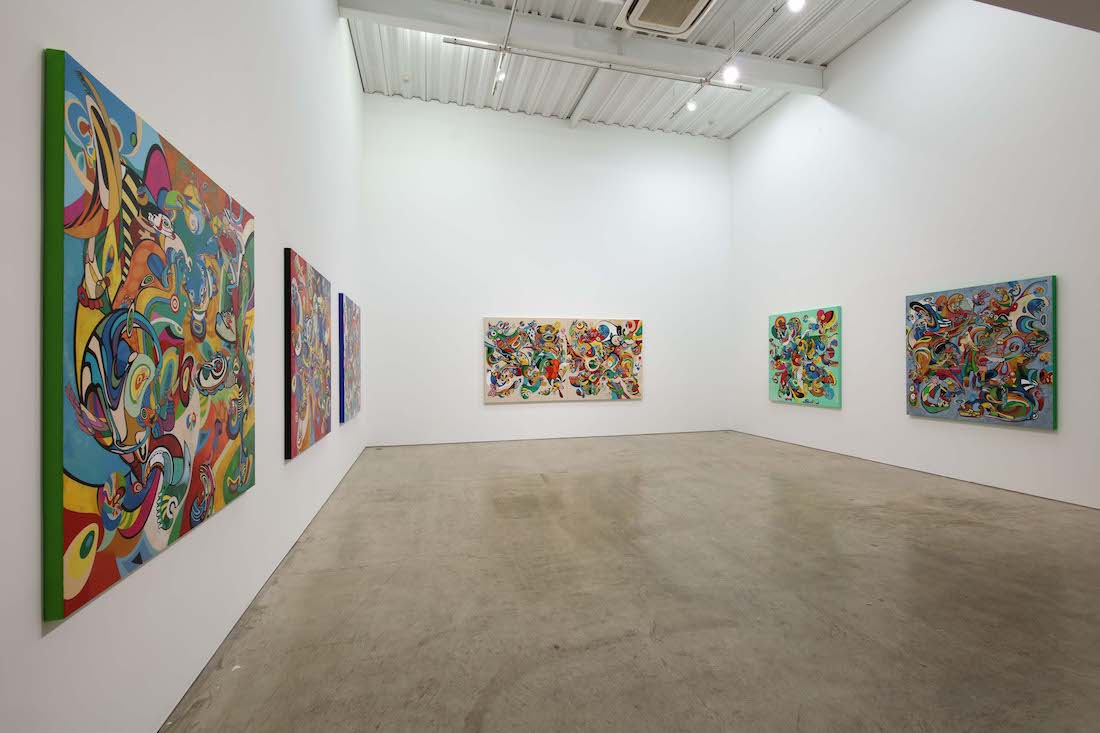 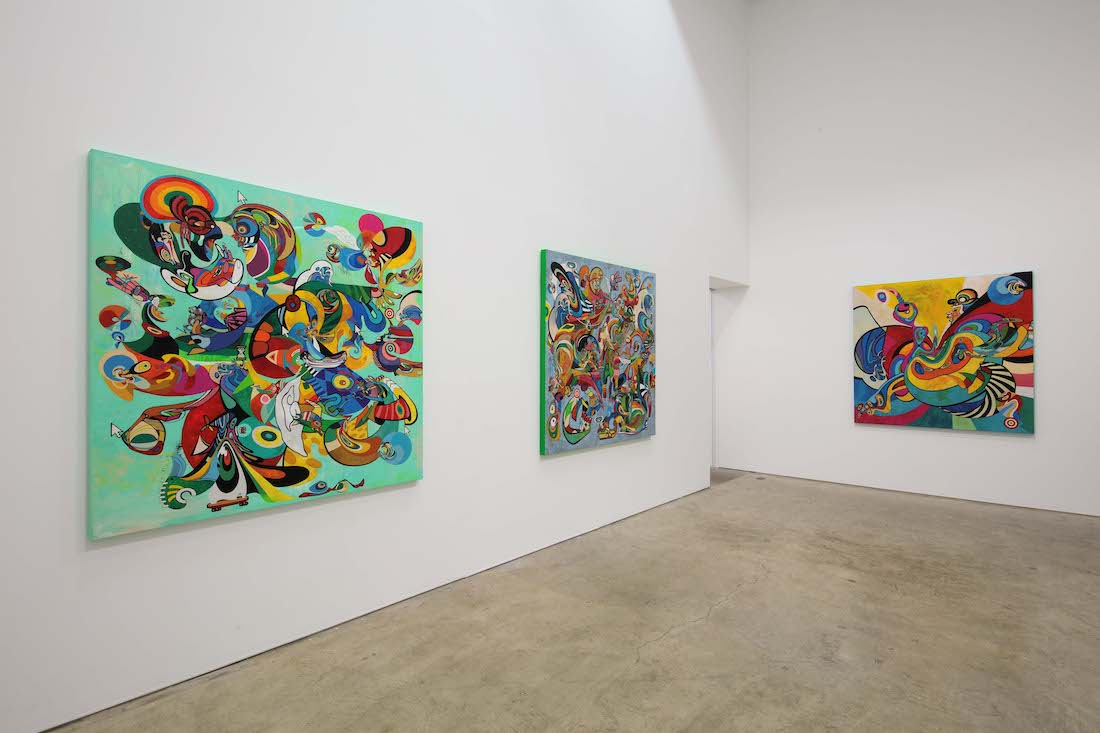 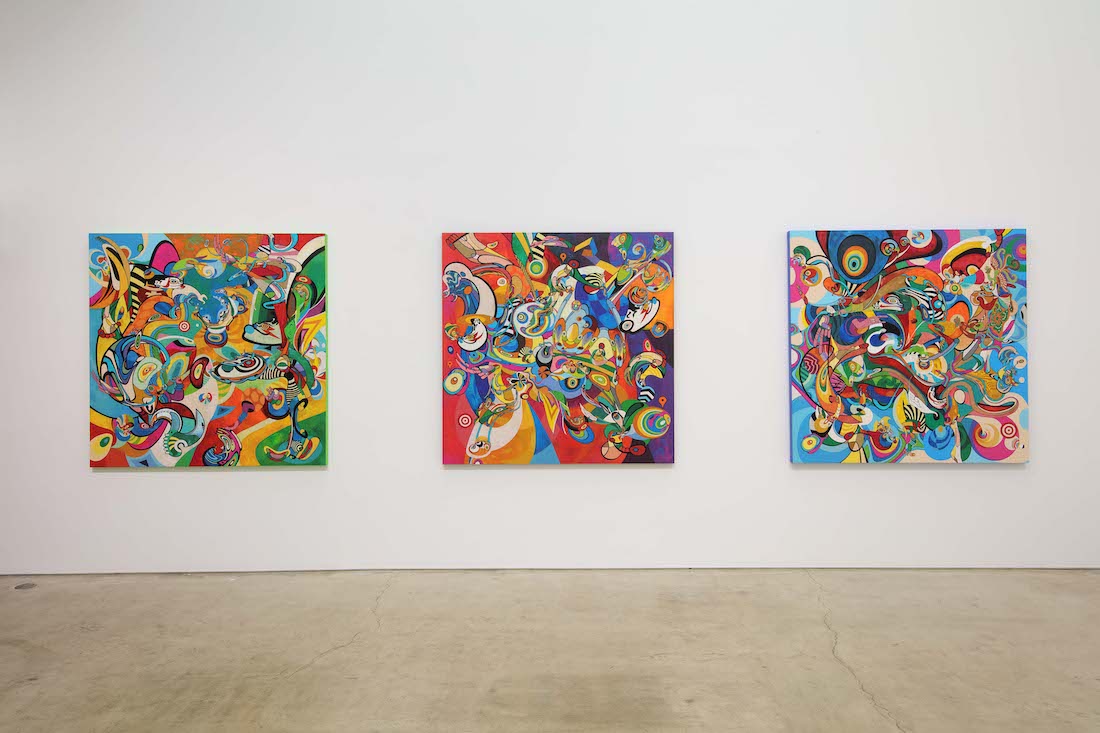 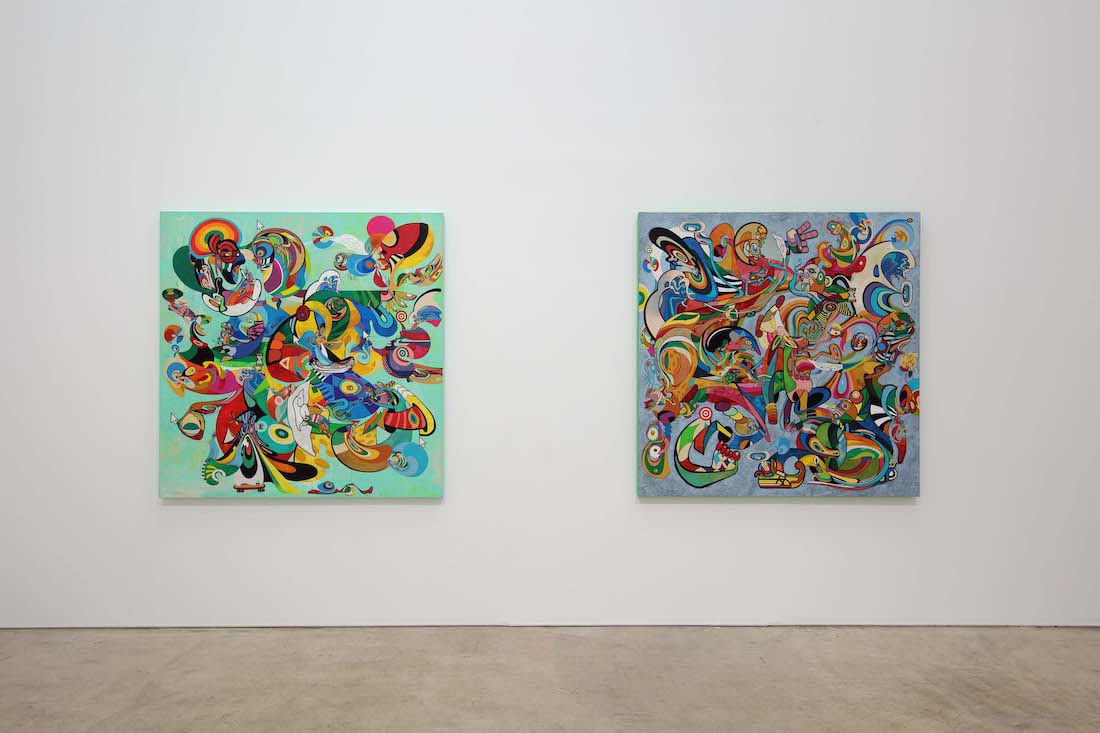 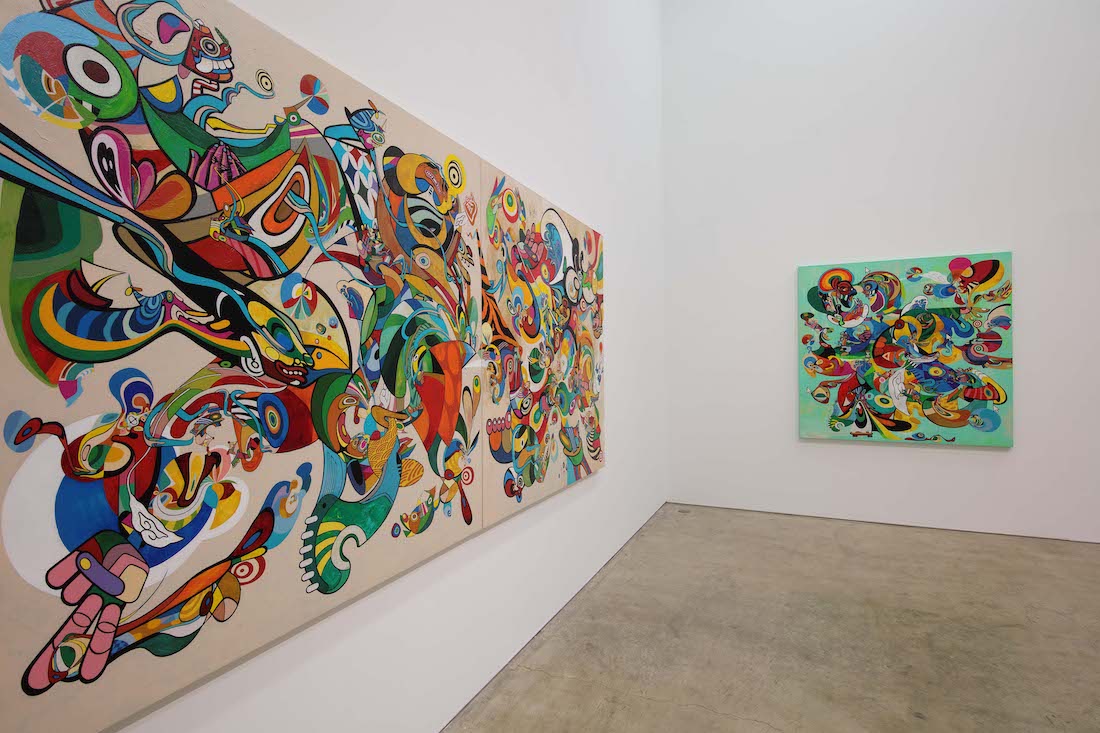 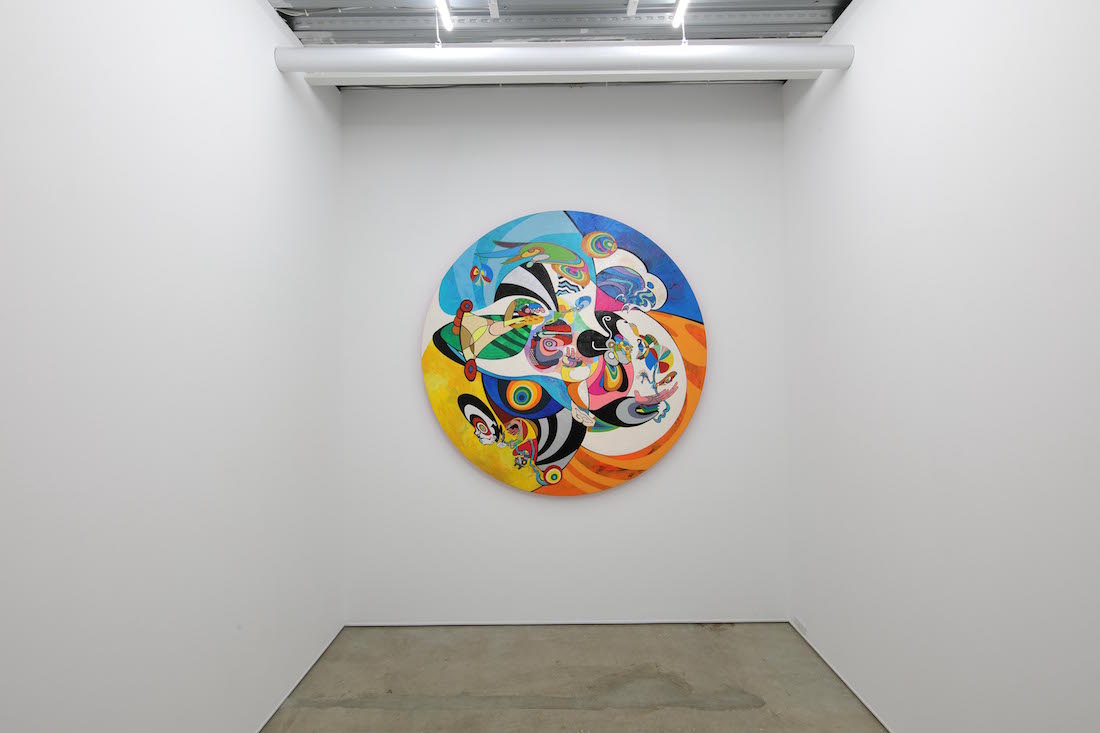 The initial idea of the works in “Cosmic Waltz” came from a simple observation of the body; how we are often unconscious of the movements of our bodies. It is said that in 24 hours, we are only fully aware of the condition of our bodies 5% of the time. Beyond that, our bodies are on autopilot, and we often forget that they perform an extraordinary range of motion. Thumbs scrolling, sitting down, tying shoes, feeling the cold sensation of the floor on the soles of our feet, wiping sweat from the forehead–movements that seem simple are often taken for granted and escape our gratitude. But this is not the case for those who have difficulty moving because of the pain in their bodies.

Alongside influence from the pop culture and traditional Javanese imageries, this series of paintings is also influenced by Modernist works of the 20th century, likely as the results of indieguerillas’ six-month stay in Stuttgart, Germany, in 2018, which exposed them to Western art history within a relatively short period of time. Elements like rejection of perspective echoes traditional wayang kulit, where everything appears flat and two-dimensional. Object abstraction in the works are manifestations of their current interest in learning to feel the essence of things. The selection of colours in these works was made to support the mood to celebrate life–the optimistic life filled with happiness. As Javanese, indieguerillas are taught to be sumarah; to accept and surrender in a positive way. Thus, bright, vivid, and bold colors are used to express joy.

“Cosmic Waltz” is indieguerillas’ first solo exhibition in Japan, following their group show in Mizuma Art Gallery in 2017 and exhibition with TENMYOUYA Hisashi in 2015. For this time, the exhibited paintings will be rotated 90 degrees once every week to alter the viewing experience of each of the works throughout the show. “Cosmic Waltz” will run from 8th September to 9th October.

indieguerillas is a husband-and-wife artist duo consisting of Dyatmiko Lancur Bawono (b. 1975 in Kudus, Indonesia) and Santi Ariestyowanti (b. 1977 in Semarang, Indonesia). Founded in 1999 as a graphic design firm, indieguerillas’s philosophy of “constantly in guerrilla to find new possibilities” has led them to become full-time artists in 2007. Nevertheless, design still plays a very important role as it allows for them to explore the use of unconventional media and techniques as part of their artistic statement. In addition to their proficiency at visual effects and inter-media experimentation, their works are also recognized for its folklore influences. The unique intertwine between traditional values and contemporary culture has brought indieguerillas to numerous important exhibitions around the globe. Their solo exhibitions include NGA Play Project: indieguerillas at the National Gallery of Australia, Canberra, Australia (2017); _hyP3<y<lu5_ at Mizuma Gallery, Singapore (2017); Indie what? Indie who? at Garis Art Space, Jakarta, Indonesia (2010); and HAPPY VICTIMS at VWFA, Singapore (2010). Their works are in the public collections of OHD Museum, Singapore Art Museum, and Guangdong Museum of Art. indieguerillas lives and works in Yogyakarta, Indonesia.

You can enjoy a virtual 3D walkthrough of indieguerillas’ exhibition “Cosmic Waltz”. 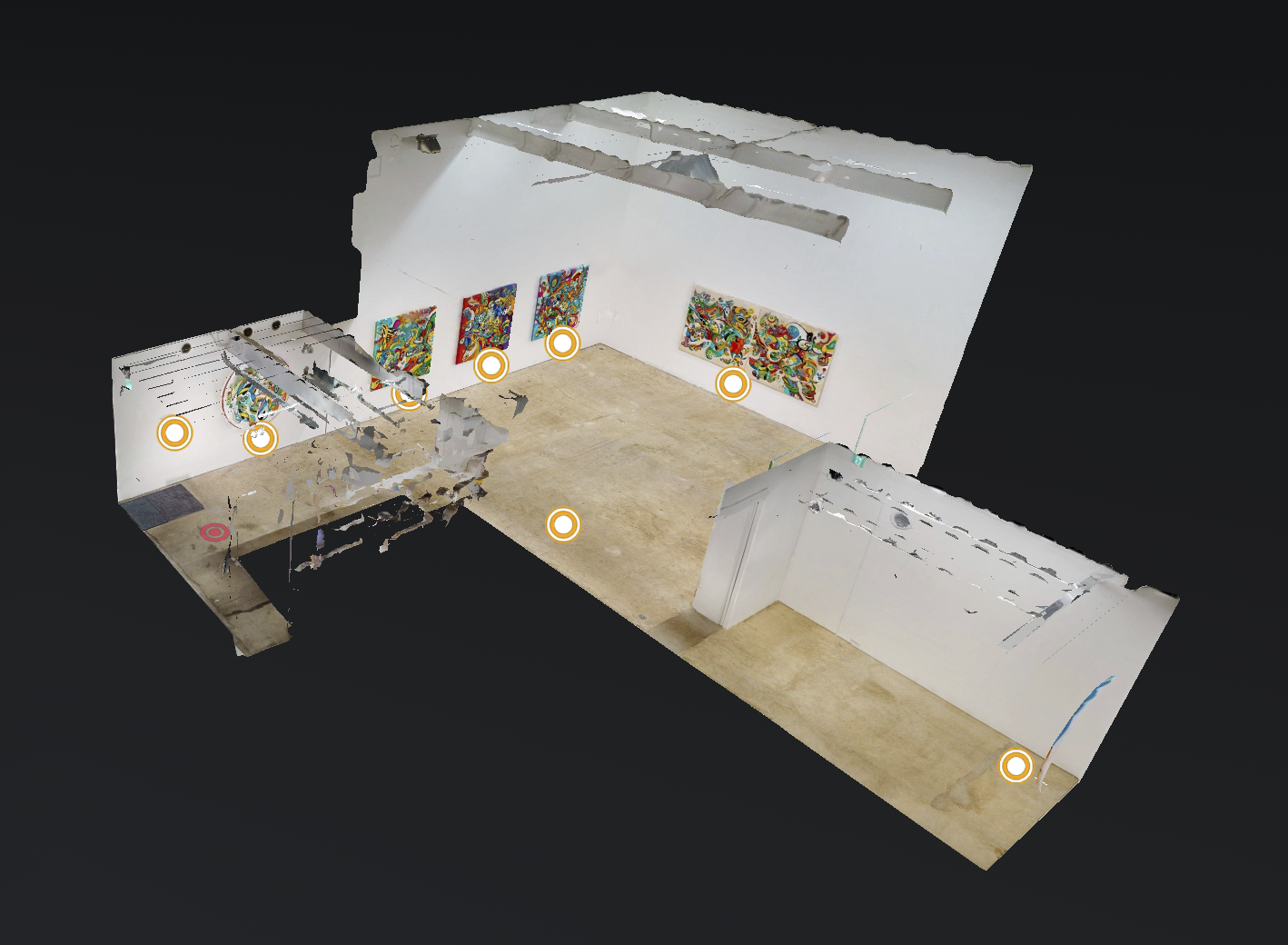