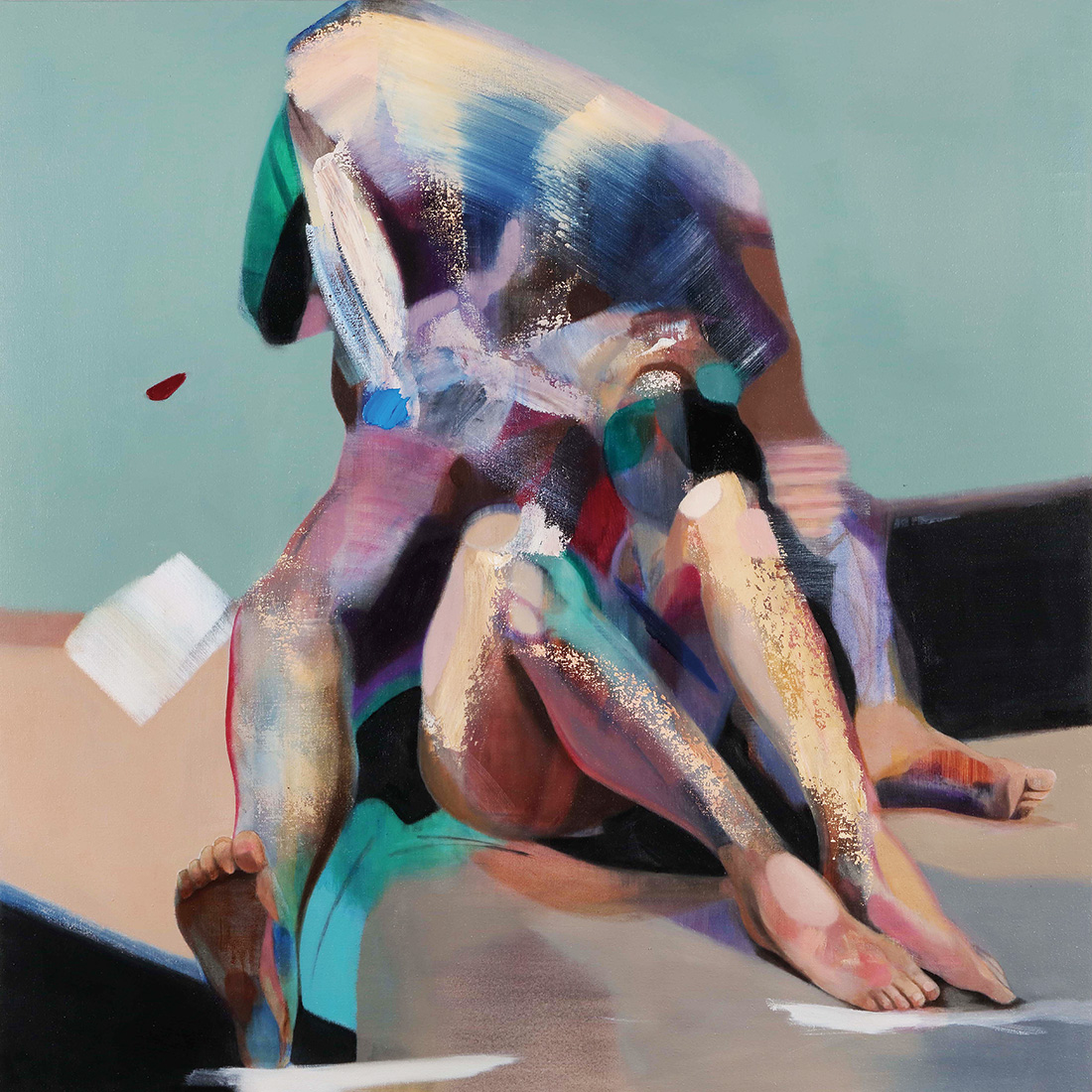 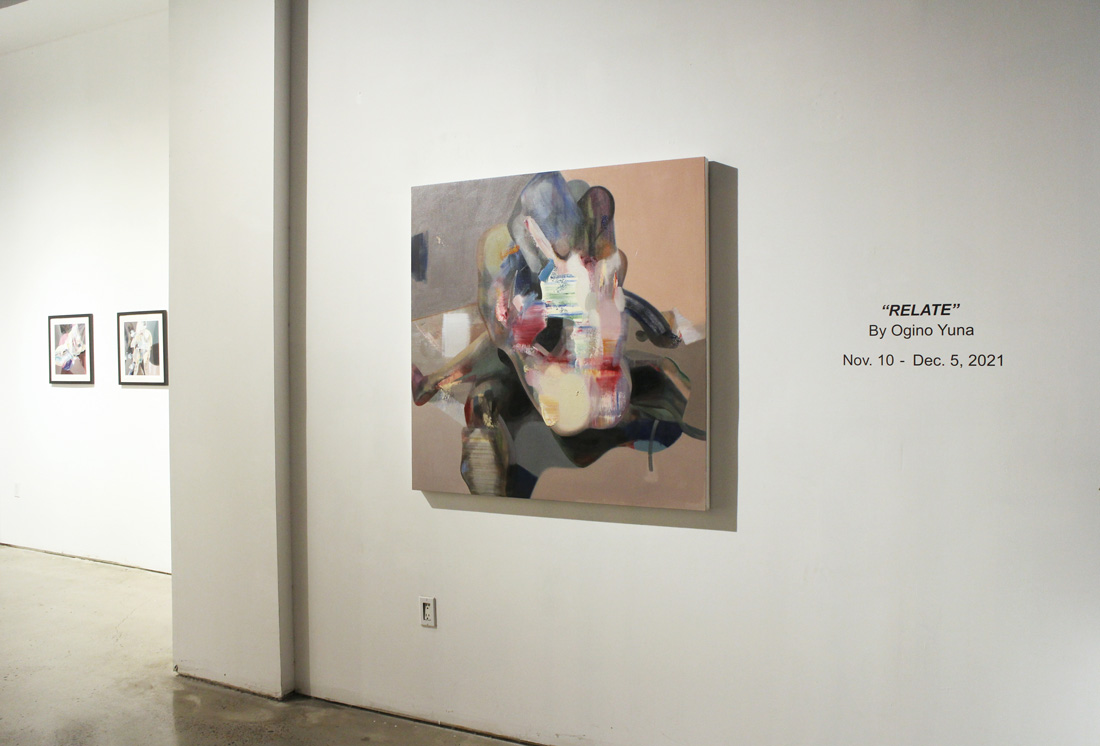 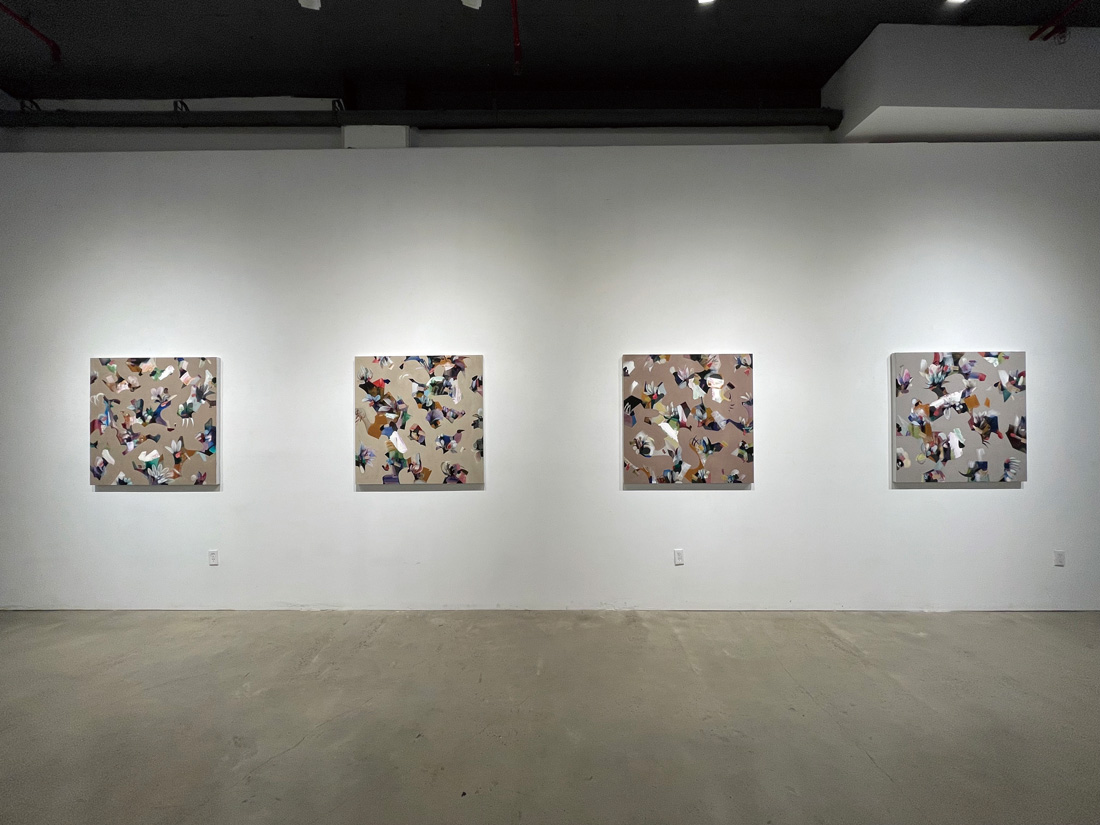 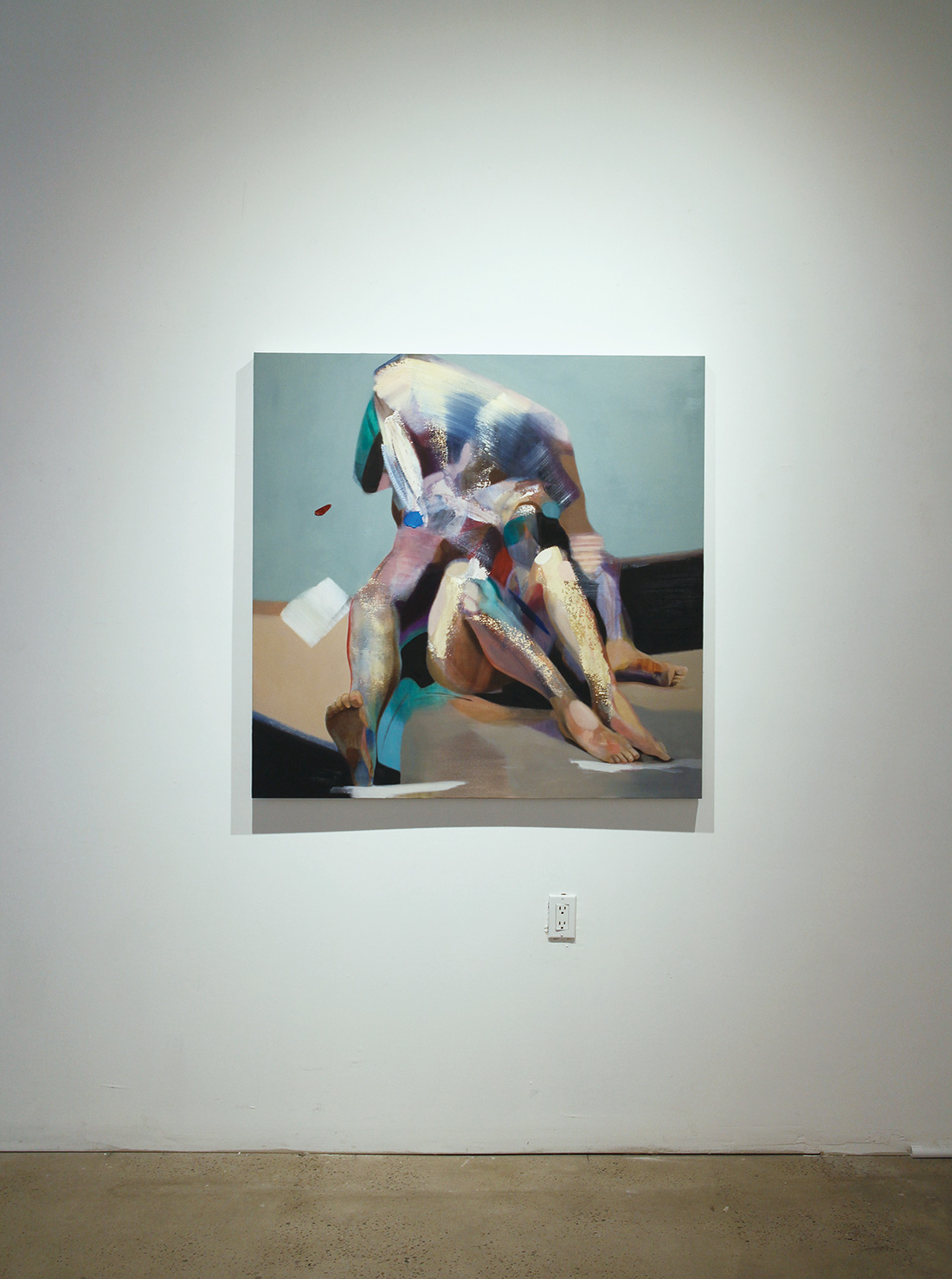 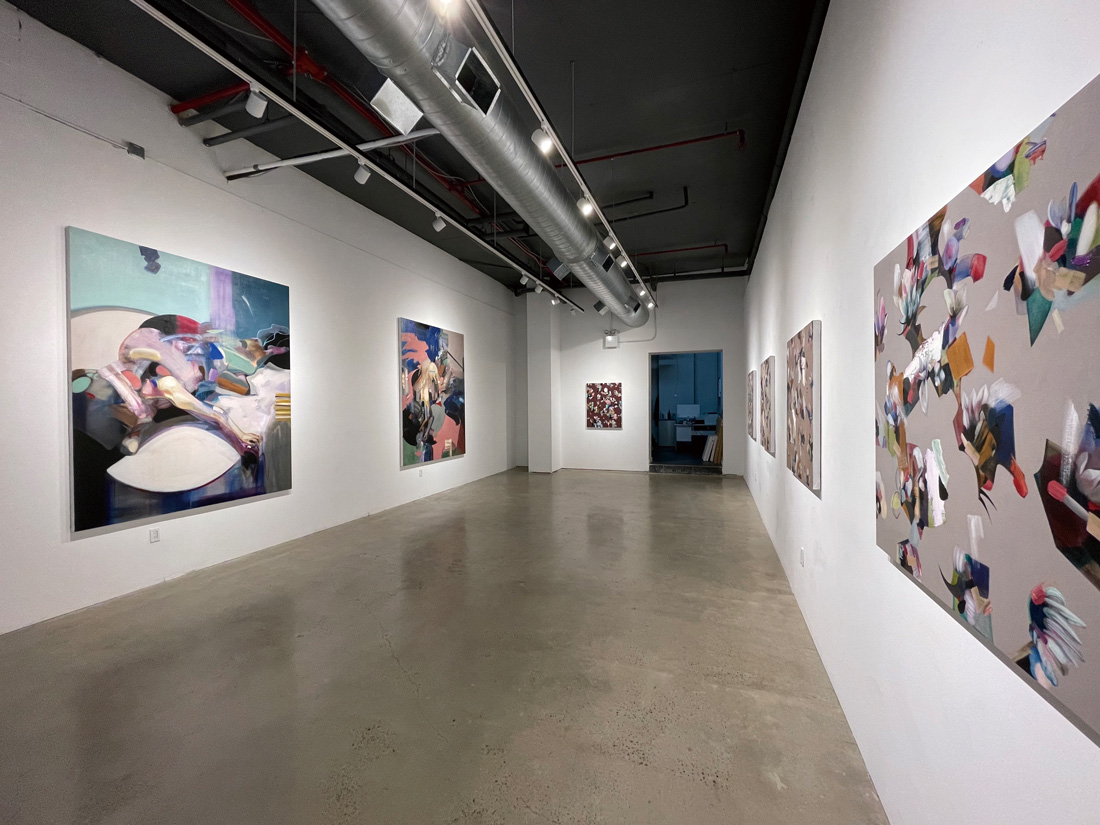 In this exhibition, we present the latest works by the artist, which were painted in Japan during the COVID-19 outbreak.

During the past year and a half, as she was imposed to limit interactions and activities with other people, and her life at home became the central focus, she began to feel little joy and happiness in her life that she had not realized until now.

In this series of works that are presented, human figures and flowers are painted abstractly as if to take away the “noun” or the label, and have them all relate together inside the painting. It focuses on a small emotional connection within a private space, without specifying race or gender.

(Normally closed on Mon. and Tue. but the gallery will be open December 6th and 7th)

Closed on Mondays and Tuesdays

Please enjoy viewing the e-catalogue of this exhibition below.

The catalogue includes a text by an art journalist FUJIHARA Erimi.

Flowers, isolated or in combination with female faces or other body parts, and nude portraits – all of these have been traditional motifs throughout the history of Western painting. These paintings discussed here do include elements that allow the viewer to identify “flowers” and “human figures,” however the artist avoids concrete depictions of her subjects as she reconstructs them as rhythmical sequences of abstract shapes.

Ogino Yuna’s works captivate the eye with delicately complex material textures of paint, applied in layers, scraped or wiped off, or traced with fingers, in concert with a freewheeling kind of brushwork, and light and brilliant colors.

In the modern age, the central question in the realm of painting shifted from “what is depicted” to “how it is depicted.” Up to the 18th century, a painting used to be considered as perfect when its surface was smooth, without showing traces of brushwork, or revealing the material quality of the paint. Nonetheless, with the advent of impressionism, painters came to regard – probably quite intuitively – both of these things as “basic elements of a painting.” Accordingly, individual styles were manifested in visible traces of the painter’s hand, and how the paint was applied. The style of abstract expressionism that emerged around the middle of the 20th century, radically eliminated representations of concrete objects, resulting in “paintings” as vestiges of the painters’ physical activities on canvas.

While painting in an abstract style, Ogino continues to adhere to such oncrete objects as flowers and human bodies, and thus transcends the dualistic “concrete/abstract” approach of painting in the 20th century. When pondering the unique appeal of her work, and attributing it, as described above, to the dense material feel resulting from the way she applies the paints, I was reminded of the concept of “tactile values” proposed by Bernard Berenson (1865-1959), a researcher in the field of art history.(1) The term describes the effect of visual information stimulating the senses of touch and motion, or in other words, a painting making the viewer feel like trying to touch or walk around the object it depicts.

While Berenson’s tactile value refers to the effect of a painting on the viewer, I kept thinking about the possibility that the tactile sense might also be what the artist bases the construction of a painting on, which led me to dig deep in my memory about the theories of French art historian Henri Focillon (1881-1943).

“It is through the language of touch that [the artist] creates the language of sight – a hot mood, a cold mood, a heavy tone, a hollow tone, a hard line, a soft line. […] We also need to expand the definition of tactile value as it is formulated by Bernard Berenson. […] It is the origin of all creation.” (2)

Ogino condenses her creative act into live painting sessions of two or three hours, after which she reportedly feels muscular pain. Applying paint with bold movements using large brushes, carving it with a painting knife, or rubbing it into the canvas with her fingers, is much like a full-body fight between the artist and her canvas. What we eventually get to see are the traces left behind by Ogino’s body and hands, and the accumulated time that went into the creation of her works.

“The hand does not create flat apparitions in thin air; it creates substance, a body, an organized structure.” (3)

“The mind makes the hand, and the hand makes the mind. […] Thus creating a previously unseen world, leaving its mark everywhere.” (4)

Compared to Focillon, it is probably impossible to adequately describe in a written text the fascination of Ogino’s works, which stems from a unique resonance between colors and layers of paint. If there was anything that I may be able to contribute, that would probably be limited to mentioning that this is a female artist who paints (mainly female) nudes. Primarily defined by male painters and art lovers, the image of nudes in Western art has been revolving around naked female bodies with a certain amount of sexual appeal.

It was Suzanne Valadon (1865-1938), the mother of Maurice Utrillo, who overthrew this longstanding conventionality. Even toward the end of the 19th century, female students at art schools and private studios were not allowed to draw male nudes, and for female painters from the newly emerging middle class, walking alone in the streets, or employing female nude models, was considered a taboo. Valadon, who belonged to the working class, painted males nudes, for which her son and her second husband posed as models. She also made numerous female nude paintings. Results of her immediate judgment, her works depicted the sense of presence of the models, and thus removed the multi-layered veils of eroticism the genre had been wrapped up in. The aesthetic shaped by Valadon in contrast to nudes depicted from a male point of view, was later inherited by artists like Sylvia Sleigh (1916-2010) in the US, and Jennifer Anne Saville (1970- ) in the UK. Although on a different level regarding descriptive quality, Ogino Yuna as well can be regarded as one painter who belongs to the same lineage.

Full of expectation as to what these exercises in ”creating previously unseen worlds by hand” may present us with in the future, let me conclude this essay with a quote from a certain poem.

“There, all is order and beauty, luxury, peace and pleasure.” (5)